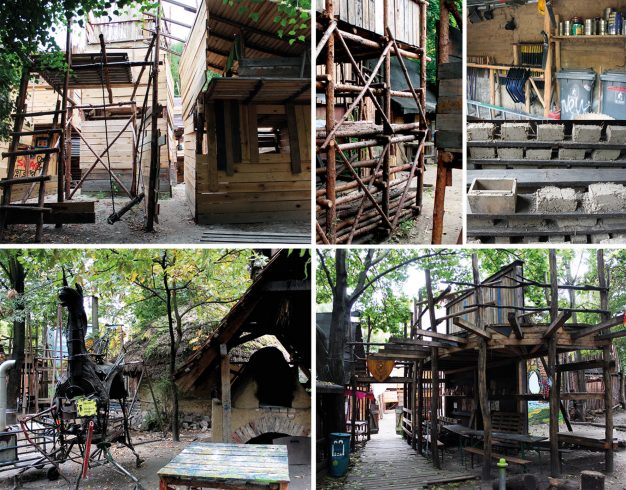 The emergence and successive disappearance of adventure playgrounds in Europe

Sørensen built the first adventure playground in Emdrup, Denmark in 1943. He affirmed that children need nothing special to make their play better, but that location was very important and that the place must not be characterised by fixed structures. Quite the opposite; they should be spaces full of possibilities. The first adventure playground was a place for children to build dens, handle natural and waste materials, and to observe and engage with plants and animals.

By the end of the 1970s, many adventure playgrounds had been built in Europe, but over the next twenty years a lot of these were closed. Adventure playgrounds need a considerable amount of space and the large plots of land that they occupied were coveted – and often then bought up – by property speculators. Also, these playgrounds tended to interfere with adult society’s ideas about of order, safety and hygiene. Adventure playgrounds, characterised by disorder risk-taking, often fell victim to the simple unwillingness of institutions to take responsibility for them.

An adventure playground in the heart of Berlin

Europe’s Adventure playgrounds were also characterized by their experimental nature and, in Germany, this aspect found and especially strong identity, where the responsibility for children playing in these places is shared between the people working there, the children’s parents and the municipality; and the children themselves determine how they play – and the risks they want to take.

<If you want to do something nice for a child, give them an environment where they can touch things as much as they want> (B. Fuller, 1972).

The adventure playground Kolle 37 was founded in 1990, in a 4000 sq. m urban void caused by an exploded bomb in Prenzlauer Berg, a neighborhood in East Berlin. It forms part of the national network of associations of adventure playground and self-constructions and it is a project of “Netzwerk Spiel/Kultur Prenzlauer Berg e.V.” The municipality that owns of the space has given the Association a mandate for the project, and 90% of its funding comes from the City of Berlin.

Kolle 37 was not born once and for ever, in fact, it can be dismantled and rebuild how ever many times children want, allowing them infinite possibilities to transform it. In this place, children can explore, create and build their own play worlds. Here, wooden huts and palafittes rise up through children’s own constructions, perhaps after a small wooden prototype built in the well-equipped laboratory.

Entry is forbidden to adults except on Saturdays, when children can show their projects to their family. The staff, made up of young people who are experts in play and education, bring security and respect the rules and children’s boundaries; in Kolle 37, children are not like people who require protection, but they are treated like adults. In fact, kids can transform the space using tools like hacksaws, hammers and nails; they can self-build mud bricks and wooden huts, carving in stone, lighting a fire and handling each kind of material, natural or not, that they find there.

Kolle 37 demonstrates the need for minimum conditions for children to play. In this kind of space, children create something not only using their imagination, but also they take action, with their own hands, to change the space in order to satisfy their needs. Here, children grow up making decisions and creating their own world.