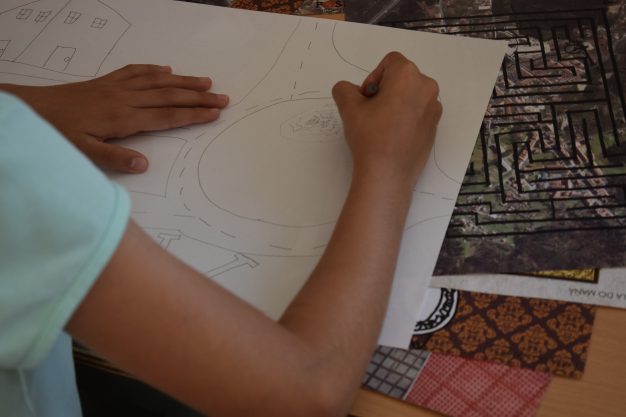 The city of tomorrow reconquers cities for children

‘The city of tomorrow’ is an educational project that aims to include children and adolescents in the construction process of public space (squares, neighbourhoods, cities). Equipping them with the necessary tools to develop their creativity from art and architecture, in order to provoke the awakening of a new view of the spaces that they inhabit.

It seeks to stimulate a critical attitude so that they begin their development as an active citizen because they will be responsible for the city of tomorrow.

How can we recover the identity of the city? How could the city be that place of meeting and exchange again? How can we feel safe again between the houses, in the city, in the neighbourhood? How can we make the city our place? What should we do to stop the city from being something dirty, grey, monstrous? These are the issues that lead us to create the Project of ‘The City of Tomorrow/ La Ciudad del Mañana / A Vila Do Mañá’.

The reality of today is that the natural connection between children and their habitat, the place where they grow and develop, the city or the town in which they live, is diluted, is barely existent. We found children in their homes, watching TV, with their video games, playing in their fenced and guarded urbanizations, moving by car and discovering the city from their window, where the park or plaza has been replaced by the shopping center. The city is a hostile environment for them, they have lost their freedom, which is limited to certain enclosures considered safe and controlled by adults. We are transmitting the message of fear that is currently being felt in society, and as a consequence, the place where they live, the town or the city, is not safe for them.

The city as a tool

With this in mind, ‘The city of tomorrow’ sees the city as an educational tool, not neutral, and one which citizens have the right to enjoy, transform and reflect their way of understanding life in community. We recovered some of the ideas proposed by the Dutch architect Aldo van Eyck (1918-1999), in which the child was given the opportunity to discover the city from his own movement, which has to be developed through his games since it is his natural way of knowing the world. We are aware that, at the moment, this generates a conflict in the streets and squares, which we want to provoke, highlight and make manifest from the workshops, even temporarily. What happens when City’s public spaces are occupied by children playing? How do the children feel? How do adults react? How can the city be transformed? Since there is that conflict, we want to transform the image of the city that children and adolescents have and, at the same time, make them visible in those spaces in the eyes of adults.

Another idea that bases our project of “The city of tomorrow” arises from the right to the city, as defended by Henri Lefebvre (1901-1991), by which the people who live in it have the right to its enjoyment, transformation and that reflects their way of understanding life in a community. Therefore, we consider the public space as a common space for learning and collective construction in which children must also have a place.

We want to give voice to those who normally do not have it, children and adolescents, promoting their right (Article 12 of the Convention on the Rights of the Child. UNICEF. 2006) to form their own judgment about the habitat in which they live and to be able to express it and make it manifest. We seek to stimulate a critical attitude to promote their development as an active citizenship, as they will be responsible for the city of the future. Forming, therefore, the foundations of a critical citizenship.

In one of the workshops we did, when the children saw me step on the grass in the park, they asked me scandalized and asked if the grass could be stepped on. So I wonder: what have we become our cities? … Are we creating generations that only live on asphalt? The public space has become a kind of “museum piece” and the citizen a spectator instead of a user. Events like the Child in the City World Conference 2018 can help disseminate the ideas and tools needed to create child-friendly cities and raise awareness in society. We must reconquer cities for people and fundamentally for children. Our team defends children’s rights, as part of an active community of residents who develop the future city, emphasising the importance of place.

Sandra González Álvarez will be speaking at the 9th Child in the City World Conference in Vienna, Austria September 24-26. Her presentation is scheduled for Tuesday 25 September as part of the parallel session: Child-friendly future. Register for the conference here.

Sandra González Álvarez has a Masters in Architectural Rehabilitation by the ETSAC. Currently, she is a PhD student in Architecture and Urbanism of the University of A Coruña and the Mackenzie Presbyterian University in São Paulo. She is the creator and director of the program the city of tomorrow.