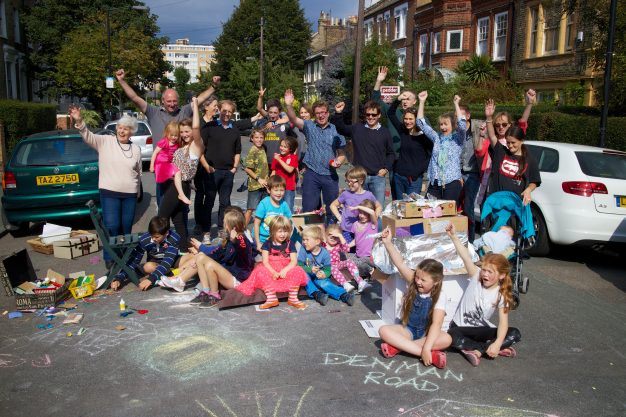 In this third and final part of his article about tackling the problem of traffic, as a priority for playable neighbourhoods and child-friendly cities, Adrian Voce wonders whether the UK’s new street play movement and its foothold in the capital will reinvigorate the campaign for more permanent changes to residential streetscapes.

(Read part 1 of this article here, and part 2 here)

In the Netherlands it is now widely accepted that it is the shared space concept rather than conventional traffic calming or imposed speed limits – even at the much lower level of 5mph – that achieves the best results. Certainly, lowering the maximum speed limit (in the UK from 30 to 20 mph) in built-up areas generally must be part of of the mix for child-friendly cities everywhere, but in residential neighbourhoods the real ambition should be for shared space – real, not watered-down, home zones – to become the norm.

The most famous example of the shared space concept being applied in practice in the UK is Exhibition Road in London’s South Kensington area; the home of some of Britain’s biggest and best-known museums, where pedestrians now have a much greater priority.

The Exhibition Road experiment is now tried and tested over five years, during which time the street play movement, inspired by the grass-roots Playing Out project that started in the west England city of Bristol, has become a truly national movement. This includes street play schemes in a number of London boroughs such as Hackney and Hounslow and, given the support for the national government, through grants to Play England and London Play as well as the Playing Out project itself, there is the potential for the idea to become a part the country’s long-term vision for more liveable community spaces.

Free travel for children, local play strategies, congestion charging and statutory planning guidance on children’s play space in new developments have all been initiatives of the London Mayor

The street play movement will also be hoping that there will be fresh interest in the capital from the first new London Mayor for eight years, Labour’s Sadiq Khan, whose imminent review of the overarching London Plan – the 15 year spatial development strategy for the capital – is shaping up to make a priority of healthier streets and neighbourhoods. This could be significant more widely because London has often been the pathfinder for innovative urban policy making, especially in those areas where the Mayor has devolved regional powers such as planning and transport. Free travel for children, local play strategies, congestion charging and statutory planning guidance on children’s play have all been initiatives of the London Mayor, since the office was created in 2000, that have significantly influenced policymaking beyond the capital; whether in other cities or within the national government.

The long term challenge is for all our towns and cities to make streets safe and playable for children on a daily basis. The way to do this is to start thinking about them not simply as roads with houses down each side, but as public spaces that have a variety of uses to meet a multiplicity of community needs; not all of them on motorised wheels. Street play days can only ever be a temporary reordering of the priorities for the shared space that is more usually dominated by moving and parked cars.

Advocates for a more child-friendly approach to urban planning will hope that the Exhibition Road experiment and other shared space initiatives, have begun to inspire planners to rethink street designs not just in showcase destinations like South Kensington, but in the less august places where people live and children need to play. The street play movement, revitalised by Playing Out, has harnessed a grass-roots activism among parents that will surely not stop at periodic street closures. If children are to reclaim their stake in the public realm, they need a proper, permanent share of the spaces and places on their doorstep, from where they are still largely absent.