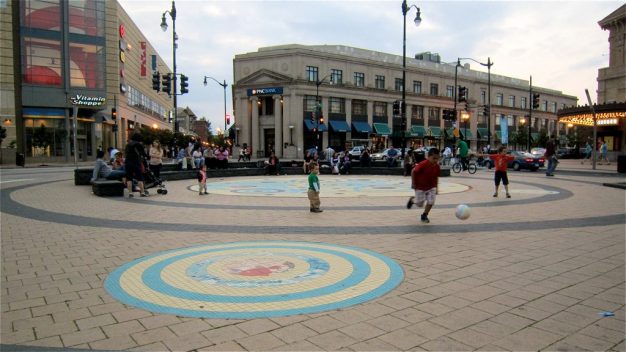 In this second part of his article about the need to tackle the traffic that blights otherwise playable neighbourhoods, Adrian Voce asks whether traffic calming is enough, or whether towns and cities need to embrace the concept of shared space for residential streets.

(read part 1 of this article here)

There is an interesting relationship between the shared-space concept and the UK home zones movement. In the 90s and early 2000s, home zones were seen by many as the great hope for street play: schemes that would enable children and, crucially, parents to feel that playing outside in the immediate neighbourhood was both safe 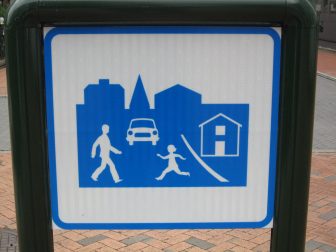 and accepted by other residents.

Like the Dutch woonerfs that inspired them, home zones were supposed to engender community through a less car-centric, more people-friendly design of streets, reinforced by lower speed limits. But as Monderman’s innovations began to catch on, so woonerfs came to rely less on speed limits and traffic calming and more on the shared-space concept.

Here in the UK, the reverse seems to be happening. Perhaps thwarted by the prohibitive capital costs of redesigning the public highway, local authorities have not widely adopted home zones. Despite enabling legislation and a DoT Challenge Fund at the beginning of the last decade, Tim Gill, who as director of the Children’s Play Council had a leading role in the campaign for home zones, reported in 2005 that only 80-100 or so had been built across the UK. It is unlikely that many more have emerged since.

Many of those campaigning for playable streets have naturally joined forces with the road safety movement in pressing for 20mph to become the norm in residential areas. The terrible toll of young British lives on our roads – among the worst in Europe – will certainly decrease as more areas adopt 20 as the limit, and it is hard to argue with this as a policy objective in itself: 20’s plenty where children play, right?

Or is 20 mph still too fast? Stuart Reid of the MVA Consultancy helped to draft the DoT guidance on shared space and is something of an authority on the subject. He has found that 15mph is a ‘threshold for driver behaviour,’ above which they assume right of way – which is why the original woonerfs set the limit not at 20, but 5mph.

If 20mph is too fast for shared space, then it is surely too fast for street play to have a chance. Of course, 20 is safer than 30 – and this alone will tend to increase parents’ confidence to allow children more freedom. But let’s not pretend that simply imposing a 20 mph limit turns a street into a home zone, let alone a play street. To a child, a car traveling at 20 mph is a hostile, dangerous hazard. Colliding with one may be less likely to kill or maim than with one traveling at 30, and the driver will have longer to brake, but it is clear who has priority – and that serious harm can come to anyone, let alone a child, who falls foul of it.

Adrian Voce
To be continued