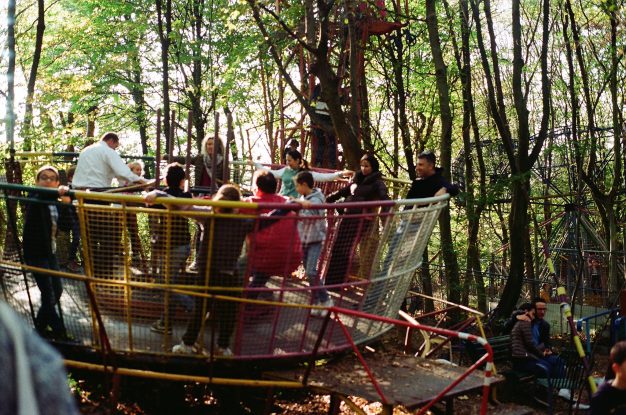 Osteria Ai Pioppi. If you want to play, you have to push and sweat

Bruno Ferrin is the inventor and creator of an ecological park in Nervesa della Battaglia, in the province of Treviso, in Italy. The particularity of this park, for children and adults both, is that there are around 45 homemade games in a forest, that work without using electricity.

A hand-made playground born by chance

The desire of Bruno and his wife Marisa Zaghis was to open an osteria (a simple restaurant) and, on a beautiful and sunny day, the first two guests to stop there, asked the owners why there were sausages hanging from a tree, a grill under it and two jugs of wine. Bruno answered them that, just in that moment, the Osteria ai Pioppi was born. It was Sunday 15th June 1969.

The ecologic playground was born gradually and by chance, from the need to learn to use a welding torch to build a structure with some hooks to hang the sausages. Bruno was really captured from this iron-welding tool and from this passion, and after some lessons in a blacksmiths shop; he started to dream about a playground in his tavern in the forest, built with his own hands. He was not an engineer, but a simple man with a big wish.

His first game was a slide in steel for children and today, almost 50 year later, ‘Osteria Ai Pioppi’ hosts around 45 home-made games like swing, seesaws, gyroscopes and roller coasters. Naturally, all these games are checked by an engineer before building starts, so they are workable and secure.

A sustainable and educational park

To build them, Bruno were inspired by movements in nature: like a moving branch, a falling leaf or a stone, rolling; a bird, flying. He gets an idea and makes a ride based on the movement that he sees. The carrousels are perfectly integrated to the surrounding landscape because all the noises seem to emanate from nature rather than an artificial or man-made thing.

Everything works manually. There are no motors. If you want to play, you have to push and sweat. Otherwise, the ride won’t move.

Bruno’s way of thinking is highly relevant to children’s education; if a child is served too much, his mind and his body waste away and stop reacting. On the other hand, children have to learn to gain freedom and to reach their own goals independently, just using the strength of their legs and arms. Children derive huge satisfaction by playing with and respecting the environment.  It is also interesting to observe how adults become childlike again in this amazing park; in fact, under the pretext of showing their children how the carrousel works, parents can often be seen playing more than their children.

Everyday, before the sun sets, Bruno walks in his Osteria looking all around and thinking that it’s funny, because he didn’t expect it, he didn’t imagine it would be such a great success; an achievement born from determination and desire.