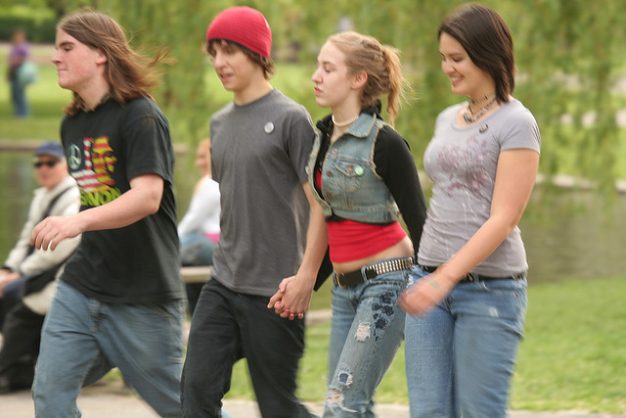 In many parts of the world, park designers have turned to nature play as a way to foster connections to nature, increase social and cooperative play, and facilitate more physical activity.  In many instances, these parks are designed for pre-teen children.

Like more traditional playgrounds, these spaces often exclude teenagers through their design.  Yet in a variety of projects facilitated by Growing Up Boulder – a child-friendly city initiative in Boulder, Colorado, USA – teens have requested parks where they feel welcome and that have design features that can integrate them into a broader public sphere.  For example, in a participatory process with Junior Rangers involved in Boulder’s open space planning, teens found a city playground at the edge of open space land.  Designed for much younger ages, teens found creative means to play with toddler swings and other equipment.  In discussion, one of the teens said, “We want parks for teens, too.  I am so tired of having moms yell at us.” 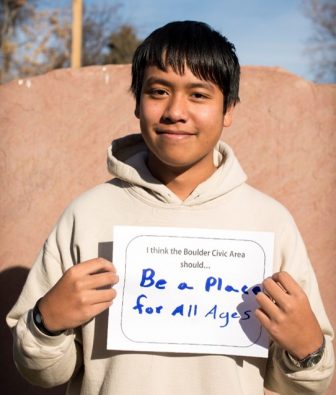 The City of Boulder’s Parks and Recreation department and Youth Opportunities Advisory Board asked teens what features they would want to see in city parks.  This list is also consistent with Growing Up Boulder’s participatory work with teens for public space planning and neighborhood design.  Ten of the most consistent features teens in Boulder have requested for public space include: 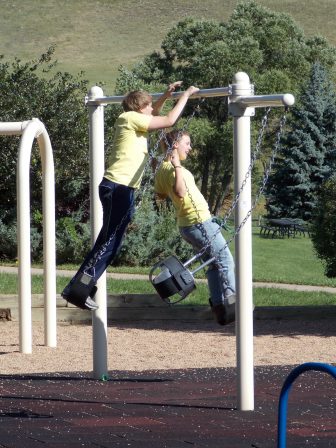 Why parks are important for teens

As the world’s cities become increasingly dense, concerns have emerged at decreasing allocation, types of social interactions, and inclusivity of public space (Day and Wagner 2010, Madanipour 2010).  Young people, in particular, are less tolerated in public spaces (Day and Wagner 2010) and can be marginalized in public processes for these spaces (Vivoni 2013).  Teen girls, in particular, are isolated from public space (Loukaitou-Sideris and Sideris 2010).

Many people assume that teens want to be separated from the rest of society, but child-friendly research has not found this to be true:  teens want to be integrated into public spaces, and they want to see public spaces designed for everyone (Bourke 2015, Breitbart 2014, Derr and Kovács in press).  This is particularly significant in the context of adolescent development.  When we isolate teenagers from other age groups and parts of society, we increase teen alienation, indifference, dysfunction, and antagonism in the younger generation (Bronfenbrenner and Condry 1970). And it goes against what teens consistently request, which is a place for all ages.

Bourke, Jackie. 2014. “‘No Messing Allowed’: The Enactment of Childhood in Urban Public Space from the Perspective of the Child.” Children, Youth and Environments 24(1): 25-52.

Day, R. and Wagner, F. 2010. Parks, streets and ‘just empty space’: the local environmental experiences of children and young people in a Scottish study. Local Environment: The International Journal of Justice and Sustainability 15 (6), 509-523.

Derr, V. and I. Kovács.  How participatory processes impact children and contribute to planning: A case study of neighbourhood design from Boulder, Colorado, USA. Journal of Urbanism: International Research on Placemaking and Urban Sustainability. In Press.

Loukaitou-Sideris, A., & Sideris, A. (2009). What Brings Children to the Park? Analysis and Measurement of the Variables affecting Children’s use of the Parks. Journal of the American Planning Association, 76(1), 89-107.

Teens on Toddler Equipment (Victoria Derr); A Place for all Ages (Stephen Cardinale);