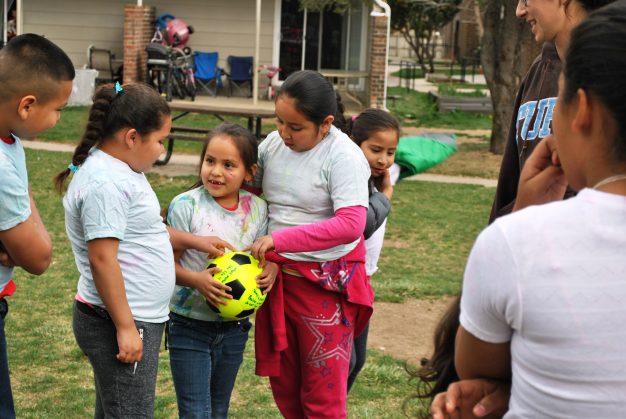 In December, 2013, the Rockefeller Foundation initiated 100 Resilient Cities, with the goal of developing a network of cities around the world to “become more resilient to the physical, social and economic challenges that are a growing part of the 21st century.”  An important goal of their program is to support adaptation to shocks such as natural disasters, but also chronic stresses that impact people in cities every day.

In 2015, Boulder, Colorado, USA, became the first city within the 100 Resilient Cities (100RC) network to engage children and adolescents in its planning efforts.  Boulder was well placed to integrate children into resilience planning because of six years of prior Child Friendly Cities work through its Growing Up Boulder initiative, which integrates children and youth into urban planning and design.  That all people should have a say, no matter their age, is an underlying tenant of Child Friendly Cities and a natural ally to resilience planning.

When Growing Up Boulder approached resilience using the wide-ranging definition from the Rockefeller Foundation, young people expressed concerns over economic issues (such as rising prices for housing and rent) and chronic negative influences of global and systemic issues (such as poverty, racism, violence, and climate change).  Importantly, young people have also offered areas within Boulder that do foster resilience, including greenways and nature, family, friends, and other supportive networks.  Many see resilience as “taking care of others and their community.”  Focusing on resilience has led children and youth to think about ways they can take action within their communities.

After its initial resilience work, Growing Up Boulder has also partnered with researchers in a second 100RC community: Mexico City.  Through a parallel process with researchers at the Universidad Nacional Autónoma de México and Universidad Autónoma Metopolitana Xochimilco, children in both Boulder and Mexico City are identifying assets and vulnerabilities in each 100RC community.  Children will then exchange ideas about how to make their cities more resilient. “Through Growing Up Boulder, we have expanded the 100RC’s thinking about engaging youth within resilience processes,” said Boulder’s Chief Resilience Officer. “It has really been great for the network.”

Integration of child friendly principles into larger urban processes can thus encourage the processes that cities seek to create through resilience planning.  When children’s rights and urban resilience are considered together, they can collectively expand our conceptualization of wellness, promote social justice, and highlight the importance of multilevel, multisectoral structures of governance.  Child Friendly Cities expand ways that individuals and communities of people can contribute to resilience through its framework for participation.