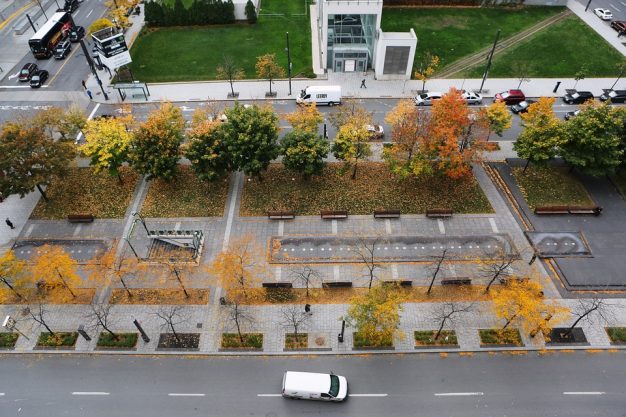 Urban beautification campaigns are usually sold to local residents as a way to improve their daily lives. Design elements – from lighting systems to signs, benches, bollards, fountains and planters, and sometimes even surveillance equipment – are used to refurbish and embellish public spaces.

Designers refer to these elements as “urban furniture”. And the projects they’re used in are usually aimed at increasing social interaction, heightening safety, improving accessibility and generally making life in the city better.

Some research argues, however, that such beautification campaigns can result in public urban spaces becoming more exclusive. Despite the promises with which they are marketed, if these projects disregard what local people need, they can feel less able, or willing, to make use of these spaces, says Jose Antonio Lara-Hernandez from the University of Portsmouth.

Cities aren’t only identified by their monuments or signature buildings. You can tell New York City and Palermo apart just by looking at what people are doing in public. A New York scene is more likely to feature someone on a skateboard eating a burrito, while a Palermo image might include a group of men in a street watching a football match on television through a shop window.

Urban space is where city children learn and play, students read and people work, walk and relax. It is through these different activities that any single city’s urban culture is created.

Quite what city spaces look like is down to urban design, a powerful tool.

Architects, infrastructural and spatial designers carefully configure the built environment – the constructed fabric of our cities – and this has a lasting effect on how we use or inhabit them.

In cities around the globe – from Algiers, Auckland and Chicago to Hanoi, Mexico City and Seoul – research shows that transforming public spaces markedly affects the diversity of what people do in them, and whether they use them.

In Algiers, the Algerian capital, neighbourhoods were formally designed in the 1970s in a rigid modernist style. Design elements including shady trees, benches and lights at night made people feel comfortable carrying out activities such as playing cards or gathering to chat, but huge buildings, wide streets and large spaces also caused people to feel insecure and lost.
Further, the land was landscaped in the kind of homogenous way characteristic of other big cities including Los Angeles, Auckland and Sydney. These large-scale and non-contextual designs have also been linked to antisocial behaviour.

Research conducted in the historic Alameda Central Park neighbourhood of Mexico City highlight similar patterns of exclusion caused by how a neighbourhood was redesigned.

After the area was transformed in 2013, there was a notable decline in the diversity of the activities people undertook there (family and religious gatherings; street art; music; informal vendors). Instead, the law now prioritises touristic activity over local people’s everyday needs and allows the authorities to operate a zero-tolerance approach towards anything deemed disruptive. Vendors have become nomadic, packing up and hiding as soon as the police are nearby.

In the Cheonggyecheon-Euljiro area of Seoul, South Korea, meanwhile, redevelopment led to 50-year-old workshops being torn down. This in turn has threatened the historical and cultural values of the local population and disrupted social networks.

How cities are co-created

In his 1968 book, The Right to the City, the French Marxist philosopher and sociologist Henri Lefebvre described the city as a co-created space. This contrasts with the more capitalist definition in which urban space is a commodity to be bought and sold, Lefebvre saw it as a meeting place where citizens collectively built urban life.

This idea that public space is a public good that belongs to everybody has been increasingly challenged in recent years, with the rise of privately owned public space. Most of the parks in London (roughly 42 kilometres squared) of green space in total) are owned by the City of London Corporation, the municipal body that governs the City of London, but increasingly squares within new developments are owned by corporations.

Urban theorists have long noted the connection between how a city is designed and how life is conducted within it. The US scholar Jane Jacobs is famous for highlighting that cities fail when they are not designed for everyone. And Danish architect Jan Gehl’s output has consistently focused on what he has termed the “life between buildings”.

As Gehl has explained, for a city to be good to its residents, those in charge of designing it have to be aware of how it is being used: what people are doing in its spaces. To be successful, urban designs have to be focused on and geared towards people’s daily lives. Gehl has explained that designing a city for pedestrians – at a walkable scale – is how you make it healthy, sustainable, lively and attractive.

When we use public spaces, even if only on a short-term basis, we are effectively appropriating them: urban designers and architects talk about “temporary appropriation” to describe the individual or group activities with which we invest these spaces.

Research has also highlighted how democratic this can be. But it is contingent on those spaces being designed in consort with residents. When a public space, by contrast, is overly designed without people’s needs being taken into account, it does not get used.

Since the 1970s, urban theorists have highlighted that we only make use of those public spaces where we feel represented. For urban design to work, paying heed to what local people actually think of their city is crucial.