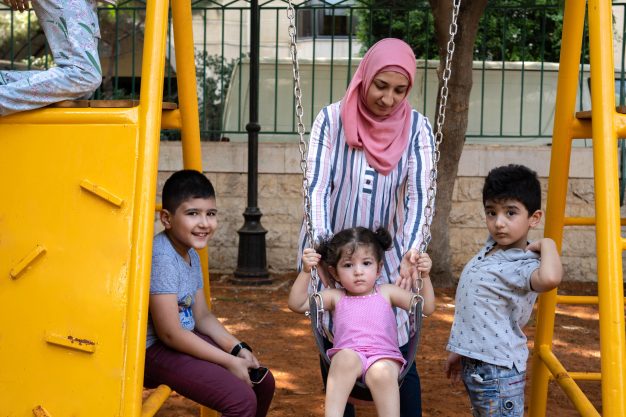 Charities give three more Beirut parks given a child-friendly makeover

Three more of Beirut’s public parks have been revitalised and made child-friendly as part of an ongoing programme led by the non-profit CatalyticAction.

After the successful rehabilitation of the Karantina public park, CatalyticAction, which works for the benefit of vulnerable and disadvantaged children, has again joined forces with other charities to transform parks into inclusive, bright and fun places for youngsters.

They were redesigned using what the charity calls a ‘participatory approach’ to create spaces that reflected the local community’s needs, as well as ensuring that the natural environment was kept intact, and also reused materials wherever possible.

This latest initiative, which has also involved UNICEF, the Lebanese children’s rights NGO Himaya and Terre Des Homes Italy, was focused on the Karm Al Arees, Kaskas and Ghobeiry public parks, and follows a similar initiative in the Beirut’s Karantina district.

CatalyticAction said: “These parks are an example of inclusive, sustainable and community oriented design focussed on elevating public spaces in Beirut by working with local resources,  artists and manufacturers. One year on from the Beirut explosion, participatory initiatives like these are vital for ensuring a recovery process in the city that is informed not just by capital and top-down processes, but rather by what the city’s residents need.”

Joana Dabaj, Co-Founder CatalyticAction, said: “Our focus with these parks was ensuring accessibility to all by creating public spaces that allow for multi-generational users to feel safe and enjoy themselves. This includes toddlers, children, teenagers and caregivers, all of whom should have access to these kind of spaces.”

The three projects are:

This included creating an inclusive play area for children which built upon the natural features of the park by creating tall wooden towers like trees complete with slides, swings and interactive games. In addition to building a new workshop space to facilitate group activities, and creating infrastructure such as benches for caregivers and residents to rest, the project also involved the planting of two ‘pocket forests’ to increase the biodiversity of the area.

Kaskas public park (main photo) is located in the neighbourhood of Kaskas and was another neglected and underused park. CatalyticAction and Himaya wanted to improve the public space for nearby residents by ensuring safety, accessibility and areas for children to play. In keeping with their reuse approach to construction, CatalyticAction’s design for the space built on the park’s existing play structure, while adding elements to increase opportunities for workshops and relaxation. In addition to swings, slides and sensory play items, they built an amphitheatre, a long table, and benches for workshops and gatherings. The new park also enables multi-generational use with areas specifically for toddlers and caregivers.

Now that the parks’ rehabilitation is completed, Himaya is already using the space to run a two year engagement program with children and their caregivers. The next step in the story of these parks is ensuring their continued upkeep by the municipality – this is an ongoing issue that needs to be tackled to maintain public spaces in Beirut. 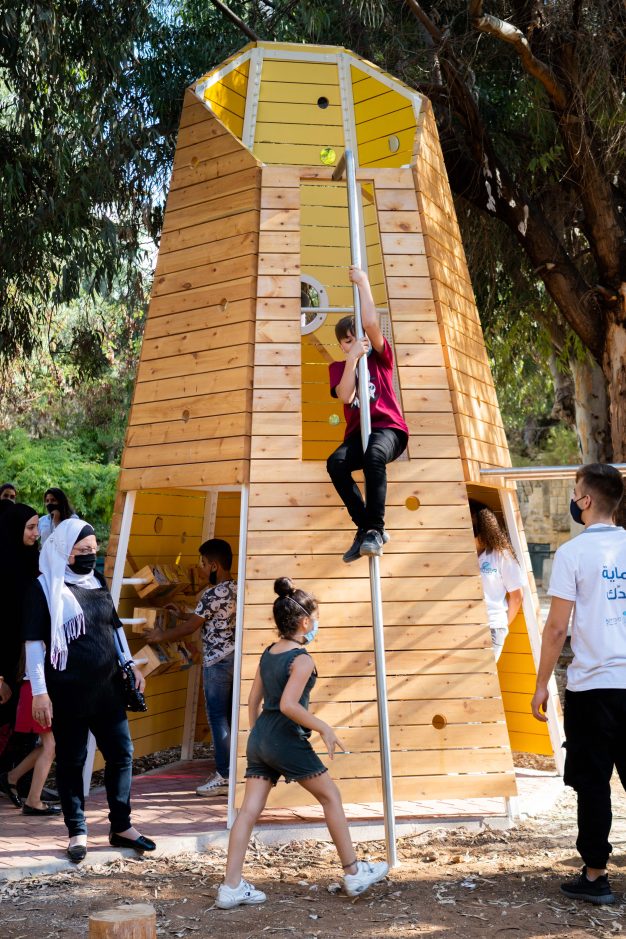 Ghobeiry public park is located in the neighbourhood of Ghobeiry, in southern Beirut. The park was beautiful and green before we began the rehabilitation process but it lacked the infrastructure for its varied users to enjoy the space – this included nearby school students, young teenagers, toddlers and their caregivers. The design of Ghobeiry Public park was led by the desire to create a space that worked for these different groups. To do this we created five different spaces within the park. There’s a resting space and open classroom for the school nearby, an active space with swings and climbing ropes, and three areas based around sport, adventure and play. The park incorporates designs created by children in the area, using drawings of the park’s surrounding nature to make woodcuttings to decorate the space.

The father of one young girl in the KasKas area summed up the positivity felt by all: “This park is the only breathing space for my daughter, thank you so much for fixing it!”