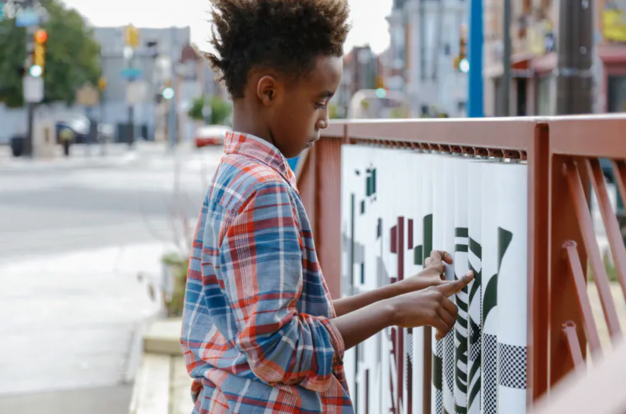 A park bench can be so much more than just a place to sit and wait. Perhaps it has a puzzle built into it, or weights that allow children to make measurements.

As researchers who study the connections between play and development, we are interested in how reimagining public spaces can infuse playful learning opportunities into children’s time spent outside of school.

In a July 2021 article we wrote for the peer-reviewed journal Trends in Cognitive Science, we outline how experts can help communities create fun public spaces where children can learn as they play. To support children’s learning, public play spaces need to be designed in line with the six principles of learning, which reflect how children absorb new information most effectively.

According to the six principles, activities should be active or “minds-on,” not passive. They should require participants be engaged, not distracted. They should be meaningful, connecting to kids’ previous experiences and knowledge. They should prompt social interaction with caregivers and friends. They should be iterative – updating understanding based on new information – rather than repetitive. And finally, they should be joyful and generate positive feelings or a sense of surprise.

The following public space projects illustrate how these principles come to life. We provided scientific consultation for the first two projects, and this work helped inspire the creation of the nonprofit Playful Learning Landscapes Action Network.

In the Belmont neighbourhood of Philadelphia, an installation called Urban Thinkscape transformed a bus stop into a space for playful learning.

In concert with a neighbourhood civic association, a group of psychologists and architects teamed up with community members, city leaders and nonprofits to redesign a plot of land where Martin Luther King Jr. led the Freedom Now rally in 1965. 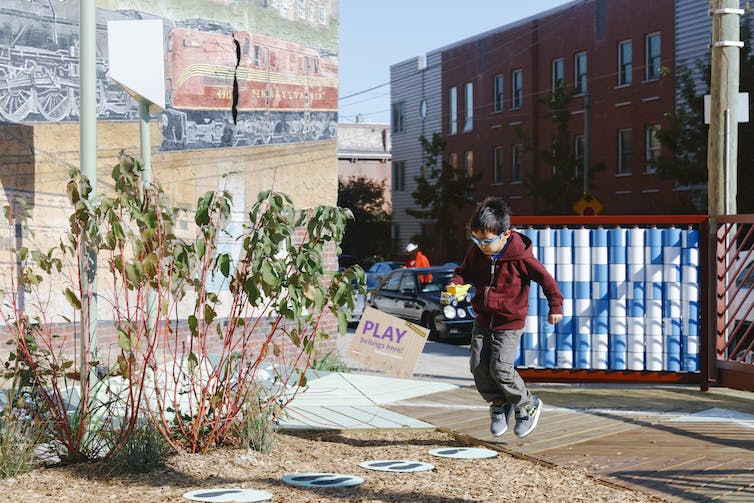 “Stories” consists of a climbable wooden deck with embedded images of familiar objects, like a book and the sun, designed to help kids create and narrate original stories. “Hidden Figures” is a metal sculpture with hidden images like fruit and shapes designed to exercise spatial skills. By reading the shadows on the ground, families can find figures that shift as the sun moves across the sky. “Jumping Feet” is a version of hopscotch that requires executive function skills like attention, memory and self-control. And the “Puzzle Wall” is a series of four puzzles featuring different images of important figures and events chosen by the neighbourhood civic association. It also fosters spatial skills.

The project involved hiring and training community members to observe adults and children using the space. They found that caregivers and children at the location interacted more – both with one another and with the space – than they did before the installation was created. In fact, the level of interaction was similar to that at a neighbourhood playground a few blocks away.

The design process, led by Studio Ludo and Digsau and assisted by Smith Playground, began by inviting families who regularly visit the libraries to reenvision what a children’s library could be. One of the installations is a climbing wall where children create words by climbing different paths up the wall’s surface. Another involves seating with large movable puzzle pieces. And the third is a stage with magnetic letters where children can create stories on the wall. 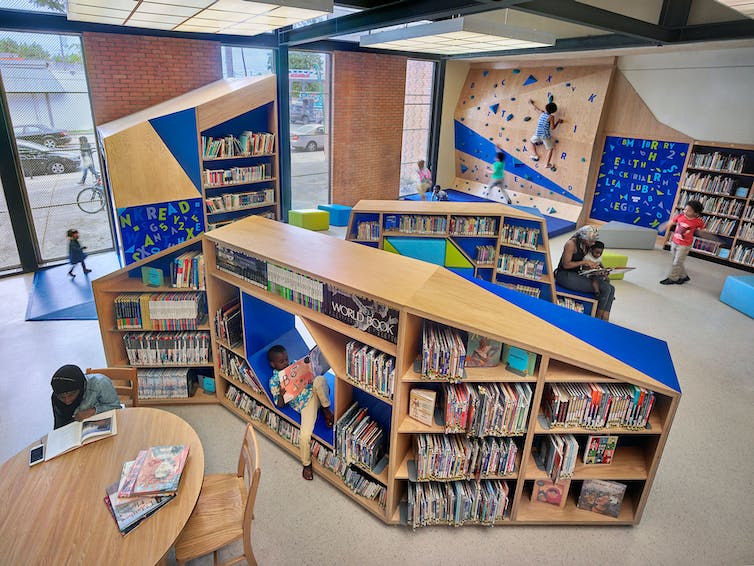 By observing how people used the spaces, researchers found that adults and children in the Play-and-Learn spaces had more literacy-related conversations, such as sounding out and spelling words, and used more spatial talk, such as talking about objects being “over” or “under” other objects, compared with libraries where Play-and-Learn Spaces were not installed. The installations also increased positive emotions and physical interactions, and decreased use of cellphones and tablets.

A final example comes from the Port neighborhood of Cambridge, Massachusetts, where the nonprofit MathTalk and community members co-designed six temporary play sites for a neighborhood sidewalk. For example, a Gigantic Number Line stimulated counting and measurement talk by presenting opportunities to measure the length of items in the environment and play games like Simon says. Sidewalk Math encouraged children to hop, jump and skip to learn more about counting and patterns.

MathTalk interviewed and observed community members using the site and documented how the activities supported math conversations and learning. Based on the project’s successes in encouraging families to find math in everyday places, MathTalk has since expanded into libraries, health clinics and other spaces.

By working with local communities and basing designs on the six pillars of learning, hese locations serve as models of how neighbourhoods can create new family-friendly play sites in everyday spaces.