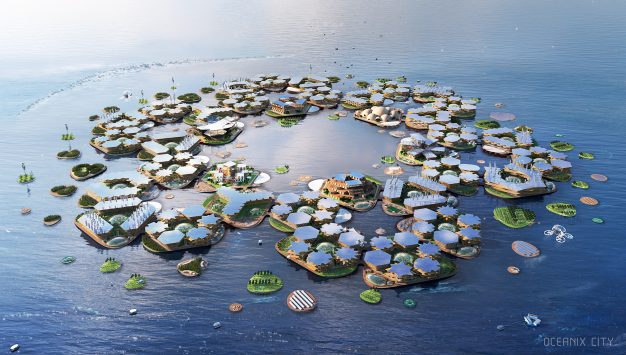 Last week UN-Habitat hosted the very first round table discussion on sustainable floating cities at the UN Headquarters in New York. Architects, designers, academics and entrepreneurs discussed how floating cities could be a viable solution to urban challenges such as climate change and lack of affordable housing.

During the day-long roundtable, the design of the world’s first sustainable floating city for 10 thousand residents, was unveiled. At the meeting, more than 70 people discussed the proposed structure and design. Including how the floating cities would be situated and could be used to house those fleeing from rising sea levels and other threats from natural or climate-related disasters in their home areas and overcome housing shortages.

The roundtable discussion is a result of a partnership between UN-Habitat, the Massachusetts Institute of Technology (MIT) Center for Ocean Engineering, the USA-based Explorers Club and Oceanix. Oceanix is a company looking to build the floating structures. According to the leading architect Bjarke Ingels, the design of the floating cities could be home to 10,000 people and it could withstand severe weather conditions. As well as allow people to produce their own power and food.

The UN Deputy Secretary-General, Amina Mohammed, said: “we have come together here to think ahead and reimagine our cities and our urban agenda.” The Secretary-General added that how we approach development and environmental sustainability in cities need a serious retooling to meet the challenges of today and tomorrow.

“We are the UN agency mandated to work with cities, be they on land or water. We are ready to engage in dialogue on Sustainable Floating Cities to ensure this burgeoning sector is mobilised to good effect and for the benefit of all people,” said Maimunah Mohd Sharif, the Ex- ecutive Director of UN-Habitat and UN Under Secretary-General.

The meeting heard from a group of young people in Nairobi, Kenya who gave their thoughts on the future of urban living via a portable screen known as Ava.“Youth are the future of cities both floating and non-floating and should bring them along and tap into their creativity and we can build together,” added youth advocate, Raphael Obonyo.

“Young people have ideas but they lack support and recognition but they will continue and make sure they change the lives of people,” said Isaac Muasa, an environmental activist in the informal settlement of Mathare and winner of last year’s UN-Habitat Scroll of Honour award.

While most of the coverage of the roundtable discussion has been quite positive. Amanda Kolson Hurley a senior editor at CityLab asks, “Should UN-Habitat—the UN agency responsible for sustainable urban development—be toying with a moonshot response to climate change, one that emerged from the techno-utopian seasteading movement that’s long been a focus of libertarian fascination?”

During the Child in the City International Seminar on ‘Children in the sustainable city’ delegates will discuss and explore ways to strengthen sustainable cities and children’s position in cities. There is still time to book your place – view the full programme and register here.