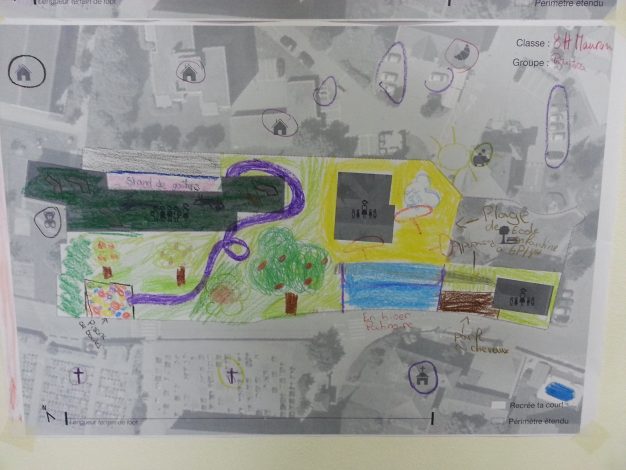 When I worked as an urban planner at the regional district of Freiburg, I initiated a project, ‘Cour d’école de Marly Cité’. This project was part of a larger project named Freiraum Freiburg and it got financial support from the Swiss Government. The objective of the project was to create spaces that encourage people to go more outside and to walk.

The idea was to connect existing places with interesting roads or roads where kids can play and older people can have a break on a bench. The second objective was to create spaces that promote biodiversity.

The first project took place in Marly. On June 23th 2015, we organised a workshop with all three hundred children from the school. They could say what they like or didn’t like about their schoolyard, what they would like to have and then they had to prioritize their wishes. They also drew images from their dream schoolyard (for example the feature photo).

After that workshop, the planners created three versions of the schoolyard. These versions were presented to two parent representatives, the school caretaker, to teachers and to politicians. The objective of this meeting was to eliminate versions that wouldn’t have been accepted by those people. The version that was chosen was then presented to the kids.

The next step involved the school children voting on the colour and type of materials to be used. The three hundred school children gathered with their teachers in the gym. Each child received a piece of cardboard with a red and a blue side. With this, the children could vote for or against one of the proposed variants. More than half of the children prefered wooden constructions on which one can test their balance. Of the three suggested color combinations, the children have chosen red and blue for the two colors. In the hilly landscape, the children are above all agreed that they must not be made of metal. About the same number of children would like to enjoy natural hilly landscapes and hilly landscapes made of plastic.

Soon after the last workshop, the city started the transformations. A year ago, it looked like this: 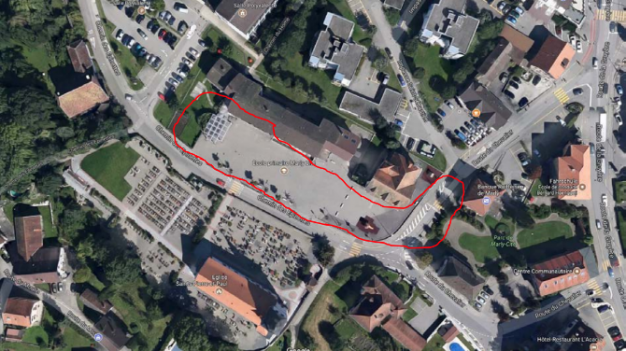 Today it looks like this: (the road you can see on the right side is closed) 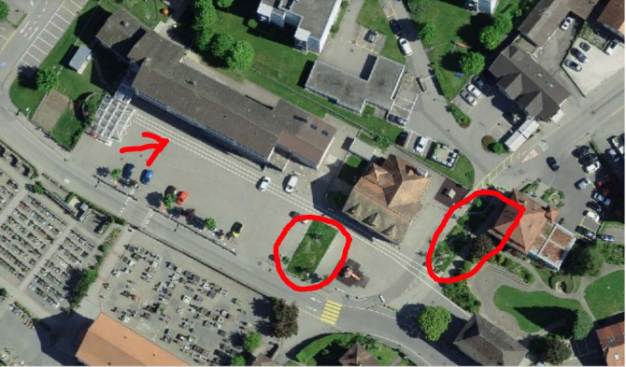 The good thing about this new place is that before, the soil was about 80° Celsius on a sunny summer day and with the trees and the grass (wild flowers that will grow in spring), it will only be about 30°C on a sunny day.

Before we started this project the schoolyard was a place for cars. It was used for people who visited the church just across the street. When we asked the kids what they didn’t like about their schoolyard, the most important thing was that they didn’t like the presence of the cars. With the help of the kids and the city we went to the responsible church. They easily understood this and I’m sure it helped that it came from the kids and not only from the local government.

For the Agglomeration of Fribourg, we didn’t make the changes with the kids. However, we did include their opinions in the changes made. For example, they told us that in summer it was so hot outside and they would appreciate shadow and water. Whereas the objective of my other project was to involve children in transforming their schoolyard. Including physical engagement (they will help to get the dirt with their shovels.)