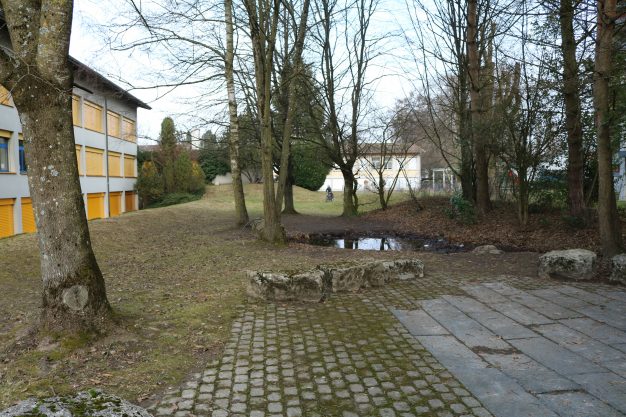 A community effort to redesign a school playground

Daniela Gaspoz is a mother of four kids and an urban planner. In this article, for Child in the City, she reflects on her initiative and journey as a parent counselor to help transform her children’s schoolyard in the municipality of Lyss.

My children attend Elementary School Stegmatt which is in Lyss in the Canton of Bern in Switzerland. The school is very old, it was built sometime around the 1950’s. It has a big schoolyard but nothing to do on it (besides running and hiding). My kids told me a lot about fights that took place during recreation. I thought wouldn’t it be nice if the kids could change their schoolyard together? The principal was pleased with this idea. So I only had to convince the municipality that this was a good project.

At first, they weren’t very pleased. They told me that it wasn’t the role of the parent council to plan projects for the schoolyard. But then they realised that we just wanted to support the municipality and that it would be nice if we could do something together.

As it so happens youth workers (called Jugendfachstelle) from the municipality were working on an intergenerational playground nearby. We got in touch with them to see if the could help us with our project to redesign the Schoolyard and then we got started. As the school had to be restored, we asked the municipality not only to restore the buildings but also the yard.

Fortunately, the city Lyss has the UNICEF label «child friendly city» and has, therefore, to let kids participate. They agreed and let us organise a participation workshop with the children, where they could tell us, what they liked, what they didn’t like and what they like doing during the break. The smaller kids crafted their dream playground. We compiled all their responses and gave them to the municipality. Their voices are now included in the restoration and redesign plans for the school.

I really have to say the children’s participation was really great, it was not fake. We also made sure to explain the lengthy process to the children. That it will take a long time to really build the yard, (about four years) but that it is very important that they tell us what they like and do not like because the people who will plan the redesign are not kids and they don’t know what is important for kids.

In June 2019, people of Lyss will vote and decide if the restoration of the buildings and the schoolyard can take place. In the meanwhile, we have the permission to do a pilot project on a small part of the schoolyard. We will ask the older children (aged 11-14) what changes they would like to see and with their help, we will transform the space. Then the planners will propose different projects and the municipality will have to agree to give the money for the changes.

We also discussed with the children that when it comes time to vote they should tell their parents why it is important that they and go vote.

In spring 2019 we hope that we can redesign a small part of the yard together with the kids. By involving the kids in building their own playground, they will take better care of it and they will probably also agree to help maintain the space (helping repair if something should break, watering the plants and so on).

As this collaborative redesign project is a very new approach for this municipality, we will take it a step at a time.

Feature photo of the Lyss playground by Daniela Gaspoz.