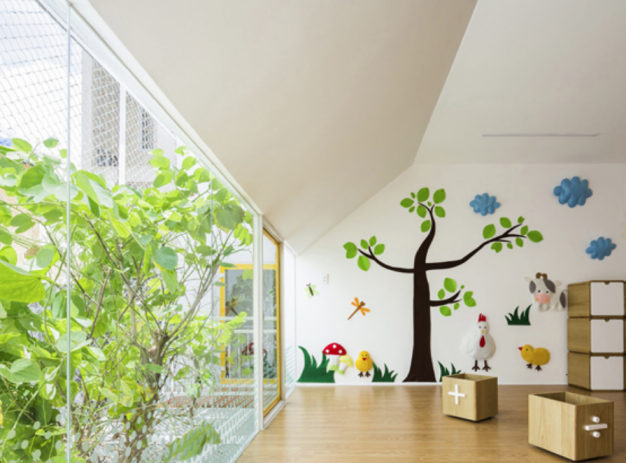 Youngsters reach for the stars in Ho Chi Minh City

The visionaries behind a new children’s day nursery in Vietnam are inspiring children to quite literally look to the stars as part of their early years education.

A starry night sky created by small holes punctured in a third-floor ceiling is just one of the innovative architectural features at the Chuon Chuon Kim 2 Kindergarten in Ho Chi Minh City.

It’s among a host of ultra-modern architectural projects in the city being designed with children in mind, and is the work of design firm, Kientruc O, which is leading the way in redesigning aspects of Vietnam’s most populated city.

The bold and brightly-coloured paint is barely dry at the Chuon Chuon nursery, which was previously just a decaying town house situated in Binh An, one of Ho Chi Minh’s more affluent districts. Yet already it is gaining plaudits for its innovative approach to youngsters’ development. Architect Dam Vu said the idea had been to design a space that was ‘fun, adventurous and somewhere children will just love to be’.

“I think we have done that well – I love being in here myself, it makes me feel young again,” he tells the South China Morning Post. The nursery’s porthole-style windows, curved hallways, hidden spaces and spiral staircases all provide an energy which, says Vu, make it a place which he himself would have relished as a child.

He quotes the words of the late, great, architect Zaha Hadid: “I don’t think that architecture is only about shelter, is only about a very simple enclosure. It should be able to excite you, to calm you, to make you think.”

Across town meanwhile at the city’s International School, the weird and wonderful design lines of the primary school library and media centre has helped make it into a space where children want to be and want to learn. It’s the work of OUT-2 design, another of the region’s dynamic architecture firms.

It describes the finished library as a ‘vibrant, textured space that stretches out in sympathy and delight for the development of the young minds it serves’. Commissioned by the school to deliver a project ‘that would challenge established notions of primary school education’, it adds: “This reverence for nature and tactile learning reminds students not to neglect the physical world of exploration for the technical – a noteworthy lesson in a school equipped with an advanced digital program.”