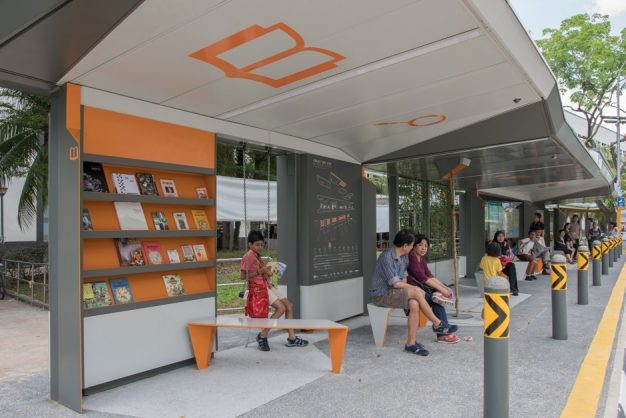 Singapore’s government is moving towards building a ‘Smart Nation’ by delivering a host of innovations to redesign public spaces such as bus stops with child-friendly features.

Public wi-fi and interactive boards are just some of the features of this project that began in 2014, and which demonstrates how corporations can collaborate with local and national government agencies to create child-friendly smart cities.

Infusing play at a bus

In August 2016 a bus stop in the in the Jurong Lake District was revamped to incorporate greenery, technology and play. This was a year-long pilot program known as ‘Project Bus Stop’ which was part of DP Architects (DPA) Corporate Social Responsibility. The company says the goal was to ‘test new ideas and add value to this everyday public realm and space to create various fun and enjoyable experiences for the community’.

The bus stop was equipped with free wi-fi, interactive smart boards, e-books, a green roof, a swing and bicycle parking, thereby creating an interactive learning space for children while they wait for the bus. Coordinated by Singapore’s Urban Redevelopment Authority, this experimental project also offered users a chance to provide feedback about the design and features available.

Earlier this month a trial bus stop outside the Plaza Singapura mall was redesigned to deliver air as cool as 24 degrees celsius, which is more than 90 per cent cleaner when not mixed with outside air. When the air inevitably mixes with air outside the bus stop, the quality drops to 50 per cent cleaner than the city air. The temperature meanwhile increases by two or three degrees.

The project, developed by Innosparks, an ST Engineering Open Lab, and engineering-based incubator does help tackle air pollution challenges. This is vital as children’s respiratory symptoms are associated with high pollution levels.

Innosparks head Gareth Tang told The Straits Times that the air is “still a lot better than the outdoor conditions’, adding: “You can actually smell the clean air, and not smell the bus’ exhaust.” The bus stop is fitted with a touchscreen that displays the air temperature and purity levels.

There are important lessons from these attempts to revolutionize Singapore’s bus stops. One of the aims of ‘Project Bus Stop’ was to use public feedback to help with future planning and designs of bus stops. However, as reported by TODAY, the relevant agencies have yet to share the results of the pilot program and whether ‘they consider reinstalling all or part of the features for the bus stop’.

Other nations can also take a cue from the Singaporean government’s approach to creating a ‘Smart Nation’ which argues that ‘a Smart Nation is built not by Government, but by all of us – citizens, companies, agencies’.