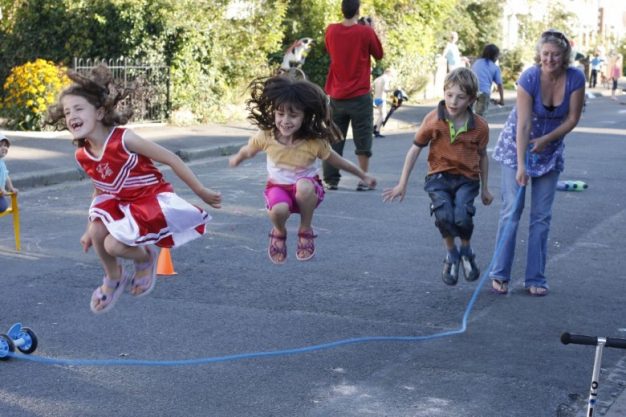 A short film made for BBC television news about the Playing Out movement that is sweeping the UK has been viewed more than 8 million times on social media.

Playing Out is the movement for street play in Britain that began with two parents, neighbours in a Bristol street, deciding to take action to enable their children to play outside without having to take them to the park. They developed a model where neighbours close their street to through traffic for a couple of hours, creating a safe space for children to play out.

Thousands of people all over the UK are now actively involved in making their streets, neighbourhoods and cities more play and child-friendly – using the playing out model and in other ways too.

The short BBC news film about Playing Out, featuring an interview with its co-founder and managing director, Alice Ferguson, can be viewed here:

Playgrounds in the street 🎾

Playing Out is a UK not-for-profit company set up in 2011 by the co-founders of the project and now consists of a small team based in a Bristol shop, managed by a voluntary board of directors. This not-for-profit organisation aims to build a culture of street play across the UK, through supporting residents and organisations and igniting discussion and debate about children, play and public space.