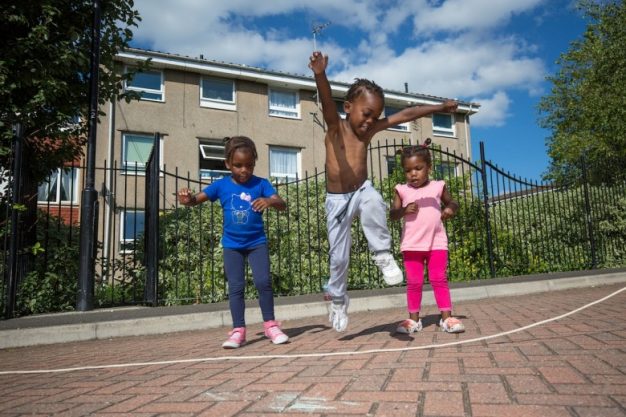 How residents are opening up the city for children to play

Playing Out, a grassroots project to enable children to play in the residential streets where they live, has become one of the most influential initiatives in the UK play movement – inspiring or directly supporting hundreds of similar schemes across Britain, and now beyond. Here, Playing Out’s director and co-founder, Alice Ferguson tells the story of what happened, how it works, and what it still aims to achieve.

Back in 2009, two mothers in the city of Bristol in the West of England were concerned about their children’s lack of freedom to play out in their own neighbourhood, to get daily exercise and make friends in the community. Since their own childhood in the 1970s, the urban environment had changed and children were no longer a day-to-day presence playing in urban spaces. The residential street where they lived – traditionally the most immediate space for children to play – felt unsafe and hostile, due to being dominated by parked cars and fast traffic.

Their concerns reflected a much wider reality facing children growing up in UK cities, where their ‘independent mobility’ has massively reduced over the decades, due largely to parents’ very real fear of traffic danger, as city streets become ever more dominated by cars. It is also evident that children’s fitness is in decline in the UK and growing childhood obesity levels are a huge public health concern.

“We decided to try to change things; starting with our own street…”

One of these Bristol mothers was me; the other was my neighbour Amy Rose – an artist and former street performer. Together, we decided to try and change things. Starting with our own street, we applied to the council to close it to traffic for a few hours one day after school. We organised neighbours to ‘steward’ each end of the road to make the space safe and to escort residents’ cars in and out at walking speed. We consciously didn’t provide any toys, games or organised activities: the children came out to play, filled the space and knew what to do!

Following a successful pilot on six streets, we worked with Bristol City Council to develop the innovative “Temporary Play Streets Order”, allowing residents to open their street for play up to 52 times per year. In 2012, we set up Playing Out as a community interest company to help other residents to do this and now a grassroots movement has taken off, with over 500 street communities ‘playing out’ across 44 local authority areas. 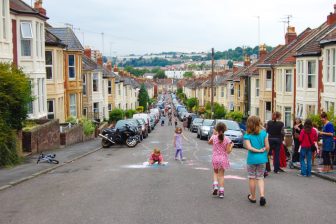 Over the past five years, we have observed the many benefits of the model for children, parents and whole communities. Now we have evidence to back this up. New research by the University of Bristol and anecdotal evidence from a survey of ‘playing out’ streets confirms the four main areas of impact to this resident-led model:

New research by the University of Bristol has shown that children are three to five times more active during playing out sessions than they would be on a ‘normal’ day after school. Using GPS and accelerometers, it was found that children were outdoors for a large proportion (>70%) of the time the streets were closed and spent on average 16 minutes per hour in moderate to vigorous physical activity (MVPA). Whilst this might not sound earth-shattering, according to researcher Professor Angie Page, one of the leading experts in this field, “This can a meaningful contribution to whether children are likely to meet the 60 minute MVPA daily target set out in the UK physical activity guidelines”.

Further to this, the vast majority of respondents to our survey said that children had learned or improved physical and social skills during playing out sessions, including riding a bike (80%), interacting with other children (88%), learning about road safety, (56%) and interacting with adults (83%).

2 Stronger communities; a sense of belonging

According to our survey, most people agree that as a result of playing out they know more people on their street (91%) and feel they belong more in their neighbourhood (84%).

Judith Langdon, Whole Place Officer for Monmouthshire Council says, “In common with many places across the country, we have witnessed a kind of slow-motion social fragmentation, where over a period of decades we’ve sleep-walked into a situation where social fabric is less strong…. For us [playing out] is a form of traditional community development: small-scale, local, creating the conditions for people to connect and find common ground with other people where they live.”

Adults have also reported a greater sense of citizenship in their neighbourhood. Crucially, at a time when community-led action is becoming ever more essential due to austerity and local services being cut, over a third of respondents said playing out has led to them being involved in other community groups and activities. One parent said, “I feel more empowered to make positive change in my community and in the street where I live”.

One of the most encouraging outcomes of the model is the lasting effect it can have on the culture of a street, with children starting to feel it’s normal to be out playing and dropping in on each other. According to one organiser, “Over time, the playing out sessions have led to more of a ‘calling for you’ culture as more kids know each other and they sometimes now play football together in the evenings”.

The ideal long-term solution is for all residential streets to become ‘shared spaces’ in the style of the Dutch ‘Woonerf’ or Homezone, or the ‘Potato Rows’ in Copenhagen, where people – including children playing – take priority and cars are ‘guests’ in the space. But this is not going to happen overnight!

In the meantime, the low-key, low-cost resident-led street play model is increasingly recognised by cities internationally as a modern solution for children’s wellbeing and for community cohesion. Rue De l’Avenir, based in France, has had a two year project to encourage play streets across the country and there are now similar street play schemes in Seattle and Toronto.