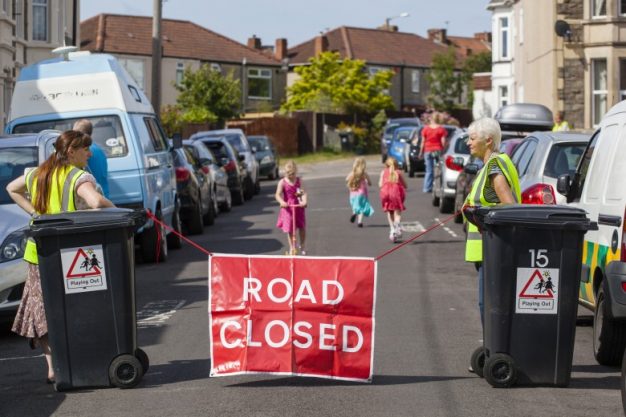 Two new reports highlight both the public health and the wider social benefits of children playing out in the streets where they live. Adrian Voce reports.

The two reports published today evaluate the three-year Street Play project, funded by the Department of Health. The scheme was based on the ‘playing out’ model, started by parents in Bristol who then formed a community interest company to promote the idea more widely. It enables residents to create their own temporary play street, with traffic diverted for an hour or two every week or month, giving children the freedom to use the space outside their own front door. Over 500 street communities have now taken up the idea across the UK, supported by Playing Out, local organisations and councils.

The national, government-funded Street Play scheme has supported parents and communities to hold regular road closures enabling children to play out in 33 geographically diverse areas, with a sustainable network of over 5,000 volunteers creating over 60,000 additional play opportunities. The national project was delivered by a partnership of, Playing Out, Play England, London Play and the University of Bristol. There have been temporary closures for playing out sessions in more than 500 streets in 45 different local authority areas since the project’s conclusion in 2016.

The report shows that children are learning important skills such as cycling, streets are becoming “friendlier” and people are feeling happier as a result. Residents report a greater sense of community; with children feeling it’s normal to be out playing and dropping in on each other. According to one organiser, “Over time, the playing out sessions have led to more of a ‘calling for you’ culture as more kids know each other and they sometimes now play football together in the evenings”.

Resident organiser Richard Crutchley of Palmers Green, London agrees, saying, “Friendships have been struck up that extend beyond the play street sessions”. A majority of parents also say it has improved their children’s sense of road safety, making it more possible for them to be out and about independently.

Playing out has made my street feel like home.

Adults have also reported a greater sense of citizenship their neighbourhood, leading to social activities and involvement in local projects such as park groups. The vast majority of people interviewed for the research said that as a result of playing out they know more people on their street (91%) and feel they belong more in their neighbourhood (84%). People say they feel safer, happier and increasingly like where they live, with some mothers reporting that it’s even pulled them out of post-natal depression. North Tyneside ‘playing out’ organiser Alison Stenning says, “The street feels different. It’s friendlier, safer, more known, more lively”. Another parent simply said, “Playing out has made my street feel like home”.

Researchers also found that outdoor, active play was more likely to replace sedentary and screen-based activities than other physical activities that occur after school and that street play initiatives can therefore help children to meet the daily target of 60 minutes moderate to vigorous physical activity set out in the government’s obesity strategy.

The second report ‘Street play initiatives in disadvantaged areas: experiences and emerging issues’ is written by researcher and author Tim Gill in response to concerns about the decline in children’s opportunities for outdoor play. Based on interviews with people involved in schemes across five local authorities, this report highlights a range of factors that influence the success of street play initiatives in disadvantaged areas, such as the need to streamline local authority application procedures and remove cost barriers. “Local authorities must make the bureaucracy as simple as possible, and give practical help to residents, if they are to reach the most disadvantaged neighbourhoods’, says Gill.

In an interview on BBC’s Woman’s hour, Jess Read, one of the author’s of the University of Bristol report said that the high increase in traffic over recent decades was a major factor in children’s retreat from the outside world, with road traffic accidents being the major cause of death for school age children. It was therefore wrong, she suggested, to simply blame ‘paranoid parenting’ for the decline in outdoor play.

Playing Out’s Managing Director and co-founder, Alice Ferguson said ‘We are delighted to have hard evidence that shows what we already knew – street play is great for children and for communities. Government and local authorities should now be supporting this in any way they can”.

‘Street play initiatives in disadvantaged areas: experiences and emerging issues’ by Tim Gill is also published by Play England and can be downloaded here

More information about the Playing Out movement can be found here