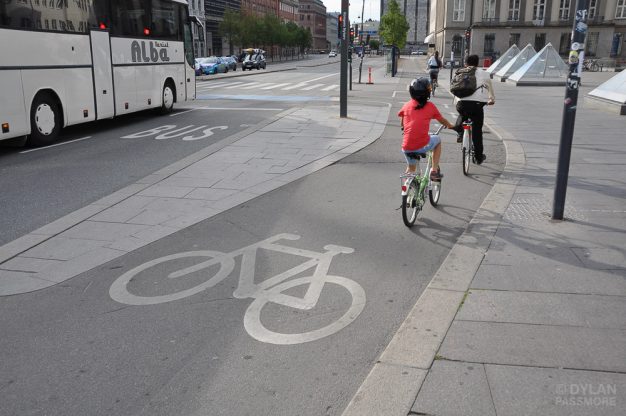 Would you let your child cycle here?

In this extract of an article in the Guardian by Klaus Bondam of the Danish Cyclists’ Federation, he argues that this is the question that all urban planners should be asked.

“I love to cycle. I’ve got no clue why,” says Emilie, a six-year-old Danish girl. She is with her friend Vilja, who’s the same age. “When I cycle, I can go to new places faster,” she says in a recent Danish campaign for cycling.

Even though it’s almost half a century ago, I would have said exactly the same at that age. When I was a child, my bicycle gave me freedom to move around with speed, ease and lightness. It gave me the feeling of being independent from my parents, as I did not need to ask them to drive me to my friends’ place or to school. I could just jump on my bike, and off I went. My childhood wasn’t very different from that of most other Danish kids. 99% of the Danish population

Are Danish parents more irresponsible compared to other nationalities? I don’t think so. It is simply that freedom for children is a huge part of Danish culture and, when designing our streets and neighbourhoods, our urban planners have always asked themselves the question: “would I let my children cycle here?”

Connie Hedegaard, former Danish EU commissioner for climate action, puts it this way: “One might say that Europe faces a choice. Do we want to pursue an American-style approach where kids depend on their parents to take them to school for many years? Or do we want a Nordic-style approach in which mobility considerations are integrated into urban planning, and where the necessary infrastructure is provided so kids can bike to school by themselves? I know which I prefer.”

Klaus Bondam is chief executive of the Danish Cyclists’ Federation and a member of the Cycling Embassy of Denmark. He was the technical mayor of Copenhagen from 2006 to 2009

See a video of the Danish cycling campaign here: