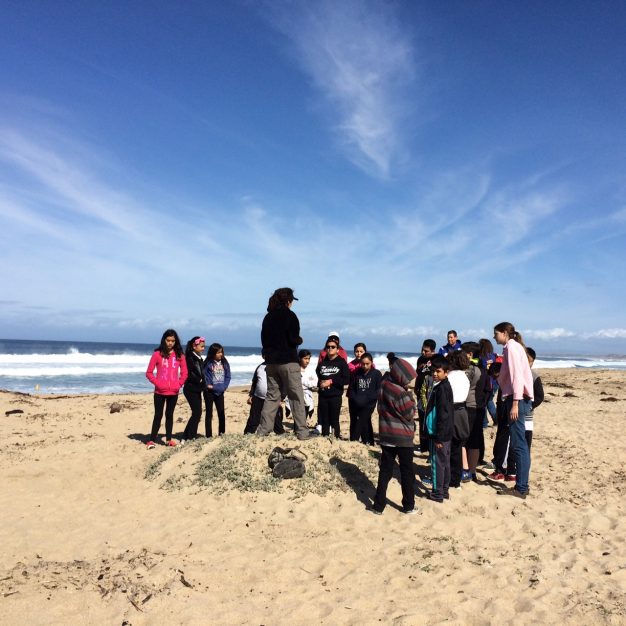 The return of the natives

Many children from lower income families do not get the opportunity to enjoy nature, even close to their homes. In this article, Nancy Vielmas and Victoria Derr, of the California State University, Monterey Bay, describe Return of the Natives, an environmental education programme aiming to promote restoration of the natural world and more equitable access to it for children.

On a sunny Friday morning, 60 fourth-graders and the Return of the Natives crew scramble up a dune at Monterey State Beach. “This is my first time at the beach!” yells one of the nine-year-old boys. While I am mesmerised by the crashing waves of the Bay, he is excited just to see the beach for the very first time.

While we know about the statistics – that, in many developed countries, children from low-income communities often do not have access to parks or nature amenities (Rigolon, 2016) – it can still be a shock to realise that children living only 20 minutes from the beach do not have the opportunity to experience it first-hand. As a Return of the Native intern, I feel an overwhelming happiness to be a part of changing this context for kids in the Salinas Valley.

During RON events, children learn about local landscapes, and how humans impact them, and then turn to actions that make these spaces better, such as picking up trash, planting, or spending time outside discussing environmental science.

Salinas is one of many communities where RON hosts events. This city of about 155,000 people is located less than 15 miles from the Monterey Bay National Marine Sanctuary, an internationally prized tourist destination, and is surrounded by some of the most highly productive agricultural fields in the United States. Salinas has been termed the “Salad Bowl of the World,” for its extensive production of lettuce, broccoli, and peppers. As a result, the city is home to many migrant farmworkers. The city’s population is 75% Hispanic, and at least one-quarter of residents live below the federal poverty level (US Census Bureau, 2015). The city also faces high rates of crime, including gang activity and youth homicide (The Californian 2016).

In this context, many children within cities like Salinas do not have access to nature or its restorative mental and physical health benefits. Salinas is an example of a city with less than average park amenities, where park access is not necessarily equitably distributed (cf Rigolon, 2016), and where concerns about safety inhibit children’s access to the outdoors (Personal Communication, Monterey County Health Department, November 3, 2016).

Parents also lack the time and resources to take their kids to the beach. One parent reflected: “I am really happy to be here with my kid on this day off. Unfortunately this isn’t something we can do very often because I work long hours.” This is a common theme among Salinas families.

While time and transportation may always remain barriers for Salinas families to access the beach, Return of the Natives helps address this gap in equitable access to nature, through its work in helping communities to see and experience nature directly; and hopefully inspiring them to go outside with their children and access the benefits of the natural wonders so close to home.

Nancy Vielmas is a student at California State University Monterey Bay and an intern with Return of the Natives. Victoria Derr is an Assistant Professor in Sustainability Education at CSUMB.

This article was co-written, with Nancy Vielmas providing the first-person narratives and details about RON.

Photo: Return of the Natives