The Mayor of London has called for cars to be banned from roads near schools in order to reduce air pollution. Adrian Voce reports.

The Mayor of London, Labour’s Sadiq Khan, has called for cars to be banned from the roads around schools, in the face of rising concerns about air pollution in the capital. He accused the Government of “ignoring” toxic air and criticised the Chancellor Philip Hammond for not raising taxes for the most polluting vehicles in Wednesday’s Budget.

The Mayor’s intervention follows a recent study finding that tens of thousands of children in London’s schools are exposed to illegal levels of air pollution that can cause permanent damage to their health, and a campaign for car free zones around schools by the children’s play organisation, London Play.

In an interview with the Times, Mr Khan compared politicians who overlook air pollution to those who were aware of the health risks of smoking 50 years ago but did nothing. 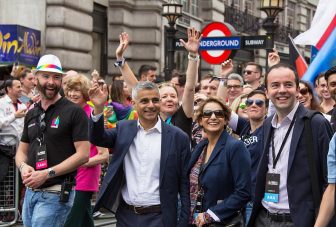 Mayor Khan said: “The reason why I’m so angry about this and it’s a priority for me is that the science and the evidence is unarguable and yet it appears the government is ignoring it. Forty or fifty years ago we thought smoking was bad and yet our forebears took no action. We know air quality is a killer, it makes you sick and no action has been taken. It’s a health emergency.”

Regarded by many as the Labour Party’s most powerful elected politician, Mayor Khan wants more parents to walk their children to school in order to reduce the number of cars on the roads. Camden council and the City of London have already banned traffic from some roads around schools and he wants the other 30 boroughs to follow suit.

“You can’t play politics with people’s lives and people’s health,” said Mr Khan. “Every day action is delayed it means another young person breathing in this toxic air, an older person having breathing problems because of the poor quality of the air and literally people die. Why can’t we work with schools and councils to have some roads outside schools where cars aren’t allowed to go? Really encourage mums, dads, carers and children to walk to school. It will be safer and you are not breathing in toxic air when playing in the playground.”