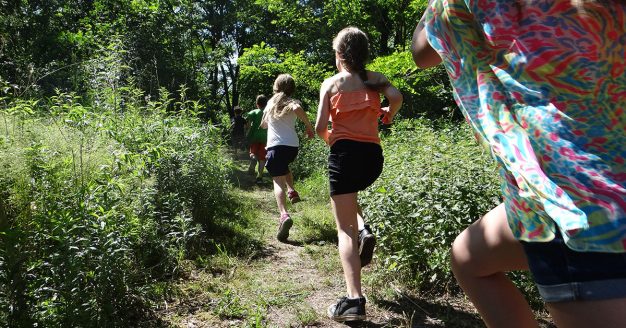 A key challenge for the child-friendly city is how to develop land for housing in a way that also creates and maintains the green and open spaces that are so necessary for children’s play, and more. Bettina Schilling reports on a new research project in Berlin that is determined to find out.

Researchers have known for a long time that natural experiences are enormously important for the development of the personality of children. Playing freely in nature they can learn to master gross motor skills and risk competency as well as developing their instinctive understanding, of both the natural world and of social behaviour.

However, even armed with this knowledge it is often difficult to defend free space for children, let alone to secure it in the long term. There is a big temptation for cities and municipalities to convert their few remaining wild places into lucrative real estate in order to fill empty holes in their housing stock, or meet budget deficits. 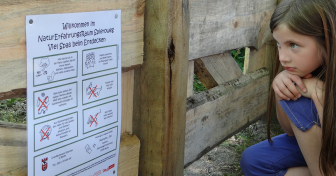 All the more valuable, then, are the lessons being learned by a new research project in the Spandau district of Berlin. Here, the first of three planned nature experiences has been opened where children can do what was previously taken for granted: climb trees, hide in bushes, and hop around in the mud – playing freely in nature. After this pilot, two further areas will follow at a later date in Pankow and Marzahn-Hellersdorf.

“I am convinced that we must be equally committed to twin objectives: to develop land for housing construction, and to create and maintain necessary green spaces and open spaces. For this, we need new concepts that do justice to the importance of the challenge. Experience of nature is such an important building block”.

And in order that this important component is developed, the project is being scientifically monitored and evaluated so that other cities and actors can learn from the collected experiences of Berlin, and hopefully more natural experiences will be created for children all over Germany.

This element – the collection of qualitative research data – is considered to be an important part of the programme, helping the project team to address what are still substantial concerns in some cities and municipalities. Irma Stopka, project manager of the project at the Stiftung Naturschutz Berlin, is aware of the scepticism, and as part of the project, she wants to find credible and persuasive answers, underpinned by evidence, to the many questions that arise within local authorities.

The nature play concept is largely unknown to parents and educators in many cities, and often leaves the impression of an exotic play space that is more risky for children than a traditional playground. This kind of anxiety can often be dispelled by practical examples and authoritative evidence, as was demonstrated in the analysis of safety concerns about the pilot area.

Children’s participation in planning and setting up the pilot site has already helped to overcome resistance in parents and educators as they have become increasingly curious at how the children themselves adopted such a sense of ownership and engagement with the space. Ultimately, it is this positive response from children that the project team believes will overcome sceptical reservations about the concept and see the idea adopted by more and more towns and cities.

Read the blog in German here