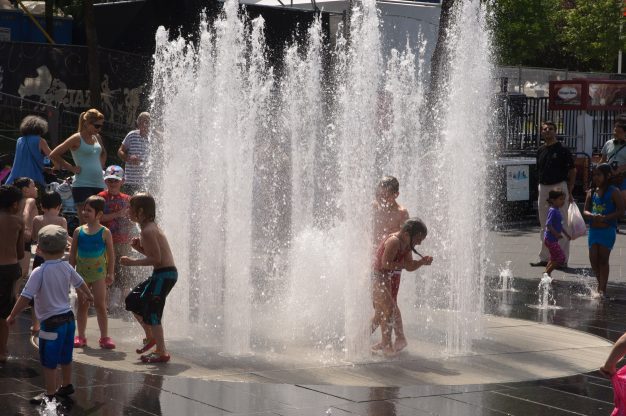 Beyond home: the urban environment through the eyes of children

A research project in a Montreal suburb highlights the dearth of child-friendly environments within children’s own neighbourhoods, write Swathika Anandan and Malaka Ackaoui of McGill University, Canada.

Children are among of the primary users of the cities we live in. Child friendly urban and built environments contribute to the well being of children in any neighbourhood. The impact of growing traffic, noise, pollution and neighbourhoods devoid of either child safety urban designs, or child friendly landscapes hinder children’s ability to interact with the environment outside home.

Our research brings attention to this issue within an immigrant community in the Saint-Raymond neighbourhood, on the island of Montreal, Quebec, Canada. We involved the children in planning improvements to their outdoor environments through a mixed-method child consultation process.

What, where and how?

The study’s primary focus was to understand the improvements that could be made to the environment through answering the questions of ‘what’, ‘where’ and ‘how’ from the neighbourhood children’s perspective and to be able to take the results to the City authorities. We wanted to involve children in the city planning process and to be the drivers of change so as to make the city more child friendly. While adults have different places for interaction, children, who are also a part of the environment do not have spaces that are safe, clean, invigorating and enjoyable. Parks filled with animal excreta and playground equipment mostly not befitting their age; long stretches of streets filled with traffic, vacant lots busy with construction activity and broken pavements with un-cleared snow and ice in the winter. This is the environment that many children have to contend with.

Beyond their socio-economic conditions, their perceptions of safety, hesitancy to play in the alleyways after dark, sensitivity to sounds and sights, anxiety about busy streets, dangerous intersections and hostile activities make up their image of the neighbourhood.

Findings from the study should be useful to better understand areas that need immediate attention and in creating a “wish list” of actions to be implemented in the Saint Raymond neighbourhood of Montreal neighbourhood that respect the children’s needs and “dreams”. Policymakers, city planning officials, urban designers and agencies concerned with the role of children in city life should be particularly interested in the methods and findings of this report. The research highlights the importance children can play in the process of planning safer and more child friendly neighbourhoods and cities.

Adapted from a paper presented at Child in the City 2016, Ghent

Photo: Caribb Children playing in the fountain in the Quartier des Spectacles. Montreal.