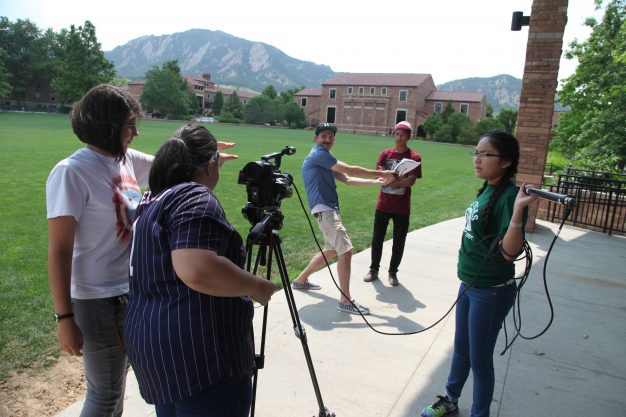 In this second part of her article about youth campaigning for climate action, Victoria Derr looks at the key role of film-making arts in both empowering young people and providing an effective medium for their message

Another climate project focused on youth engagement and education, “Lens on Climate Change” (LOCC), has been developed by the Cooperative Institute for Research in Environmental Sciences (CIRES) at the University of Colorado, Boulder. This initiative has engaged young people in developing short films that explore the effects of climate change on their lives and their communities (CIRES 2016).

Film topics vary – from Eco-Warriors who demonstrate the pitfalls of poor environmental behaviours in the home, to “Coyote and the Drought,” which builds on Navajo stories to tell the tale of area lakes drying up in the Southwest U.S. – but all share common ground in using humour to address a dire issue, placing value on collaborative decision-making, demonstrating young people’s interest in sharing their lived experiences and culture, and stressing the importance of ways to make impacts now.

LOCC youth reflected that they enjoyed using art as a form of expression, learning more about their communities, working collaboratively with peers and mentors, and using film as a means to educate others. One student reflected, “The best experience of LOCC is they let me use my talent in art . . . This is a rare experience for me, and it helps me in so many ways to learn other skills such as leadership, teamwork, and how to cooperate with others.”

“The world isn’t doomed … we can fix it”

Another student said, “I understand now that the world isn’t doomed, but we can fix it and make it better.” Similarly, another student said that “The best things about the LOCC experience is making a film about how people could make a change for the better…These films…will hopefully make others do their best to help the earth.” (Personal communication, Anne Gold, LOCC, November 30, 2016).

Researchers in Asia have also employed participatory video in Eastern Samar, the Philippines – and in Vietnam and Nepal (Khamis et al. 2009, Plush 2012) – as a means for children and youth to express their ideas for climate change adaptation and resilience (Haynes and Tanner 2015). Like Lens on Climate Change, the participatory video projects in the Philippines engaged young people in deepening their knowledge as well as expressing concerns, views, and hopes.

In a different application, these film projects also asked children to share their views with community leaders. Children expressed that “our inspiration in making the film is our fellow youth . . . We believe and claim that children hold the future, so let us lessen the risks . . .” (Haynes and Tanner 2015, 366). And “I don’t want this to end only after the film. We want [the government] to adopt those practices which could benefit our community” (op cit., 366).

From art to legal action

Read the first part of this article here