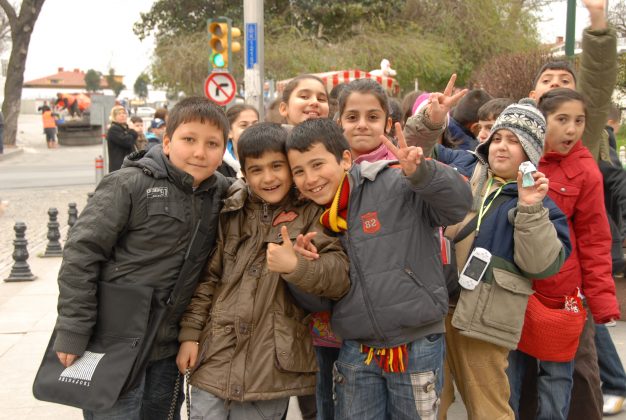 Istanbul’s children are being crowded out by the rapid transformation of the city’s public realm. Bahar Aksel, Assistant Professor at the Mimar Sinan University of Fine Arts in Turkey makes the case for a fresh approach to the capital’s urban agenda; one that could make Istanbul a child-friendly city.

The transformation of Istanbul began in 1980’s with the large-scale movement of people to the capital from Anatolia. This dramatically affected population density, the balance between industry and services and the city’s urban structure. Squats appeared for the first time as newcomers sought to settle in the city’s overcrowded housing stock.

After 2000, the local government identified Istanbul’s potential as the new investment capital of its region and started to construct a global city, complete with new high-rise buildings, highways and bridges. Gated communities in the outskirts of the city became the most desirable residential areas, especially for families with children.

After 2010, central areas of the city also started to regenerate, as residential blocks and new skyscrapers targeted the families that preferred the urban lifestyle. As result of these changes, Istanbul’s population grew more diverse, with an increasingly metropolitan feel, and a modern urban environment to match.

Whilst this major development agenda focused largely on construction, public services, such as sport facilities, open public spaces, parks and playgrounds were relegated to a secondary role, with children and young people in danger of being excluded from the modernization of their home city. With the main target group for the new city scape being adults, with their spending power, Istanbul’s young population was largely excluded from the transformation, or else marginalized to its playgrounds.

Even though the city authority runs many large-scale public space projects – conforming to national government standards for open space and facilities for residential areas – these tend to be mostly formulaic and inadequate to meet the real needs of specific locations and their residents.

On the other hand, neighbourhoods with different economic and social backgrounds vary widely in the quality of their public space. Public open spaces, as environments for meeting, assembling and socialising acquire even more importance than usual in cities undergoing transformative changes. These spaces are crucial for developing interactions between people, helping to build community cohesion, sustainable social structures and the growth of a collective memory, common values and active citizenship. This can be especially true for for a rapidly changing city’s children and young people.

An overview of Istanbul reveals that peripheral neighbourhoods such as Sultanbeyli, Arnavutköy and Başakşehir have the most dense child populations, having steadily increased since the 1990’s. The central neighbourhoods of Beşiktaş, Bakırköy and Şişli have fewer children, although there are variances too, within each of these neighbourhoods.

The challenge for Istanbul now is to firstly take account of these changes and their impact on its young population, then to identify the areas of need and their nature in order to steer future developments towards a greater response to children and young people.

This will involve: describing the city’s recent history of urbanisation; identifying the different levels of economic growth and educational attainment between neighbourhoods; recording the percentages of children in population growth; and cataloguing public investment in facilities and services for children. Districts will be categorised as old or new, traditional or modern, central or peripheral, and having gated communities or ordinary neighbourhoods. In this way, the local government can begin to develop a neighbourhood typology of relative advantage and disadvantage on which to base a new programme of projects to make Istanbul a child friendly city.

The different urban characteristics and patterns of different chosen districts will be analysed in detail in order to develop a comparative approach. By determining the different conditions of the physical environment, the quality of the cityscape, the extent and accessibility of parks and other facilities, public spaces will help to define the diverse levels of need. In this way Istanbul can continue its modern transformation by creating effective, child-friendly, youth-oriented built urban areas that will integrate children within their living environment; having the positive, long-term effect of engendering real citizenship.

Bahar Aksel,
Mimar Sinan University of Fine Arts in Turkey
(adapted from a presentation to the Child City Conference, 2016)