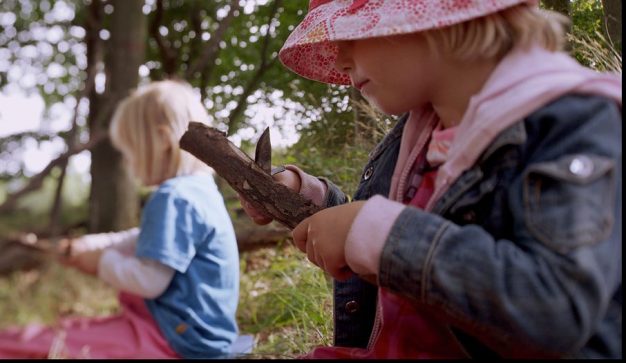 This new award-winning documentary reveals the stark contrasts between America’s obsession with standardized tests, at the cost of everything else, and Scandinavia’s embrace of all things nature-based. It’s clear which is the more successful approach.

There is something terribly wrong with the American education system. It has become less about the children and their instinctive love of play, exploration, and innovation, and more about the collection of data for adults who want kids to attain ever-higher test scores. Entire years are lost to preparing for costly standardized tests, and even recess – that most crucial break throughout the day – is being sacrificed to create more time for study. This is unnatural and downright abusive for children.

This is not the way kids should be learning. It’s no wonder that American kids are more stressed than a child should ever be. They suffer from high rates of ADHD, obesity, and depression. Parents are burdened with keeping on top of several hours’ worth of homework each night, not to mention the constant driving around to extracurricular activities and additional tutoring, all in the name of preparation for success in adult life.

In the words of John Dewey, “Education is not preparation for life; education is life itself.” Surely there is another way of teaching children so that they enjoy it, so their childhood is not lost, so that they become creative innovators, rather than robotic test-takers.

A brand new documentary called “NaturePlay: Take Childhood Back” delves into this issue, taking the stance that children are now the world’s most endangered species, but that there’s hope – if you know where to look.

After experiencing the “diseased” U.S. education system firsthand, Danish filmmaker Dan Stilling (who filmed “The Martian”) and American producer/writer Aimie Stilling head to Scandinavia to show how children are educated there, in stark contrast to the U.S. approach. The result is a beautiful 80-minute documentary that moves between the forests near Copenhagen to the fjords of northern Norway, looking at the unusual and truly wonderful ways in which Scandinavian children are taught. The film has been very well-received and has already won 5 international awards.