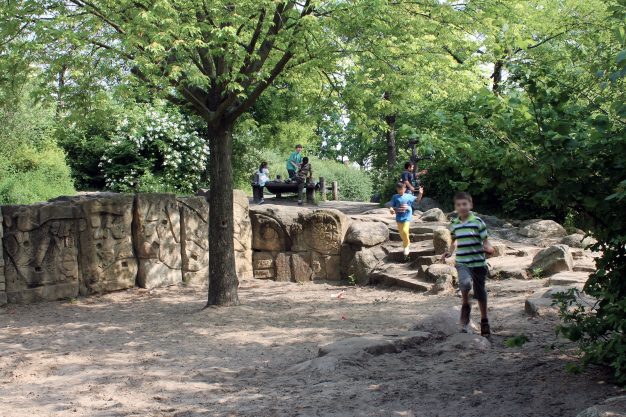 In the last thirty years, a lot of schoolyards in Berlin have changed their aspect, becoming places where children can spend their free time in a beneficial way, developing their confidence and self-esteem without the constant presence of adults. Grey areas of asphalt, offering few play opportunities, are becoming huge green expanses, full of playful learning possibilities, through environmental interaction.

Children spend a large part of their day at school, which is therefore an important focal point for their social lives. In a city, where there are different ethnic groups and where different languages and cultures sometimes produce tensions, the school offers to children a direct way to mix and integrate, overcoming cultural and other barriers. By extension, children’s capacity to socialise also provides adults with opportunities to socialise and communicate better.

The potential for the landscape to enhance social benefits – to become a catalyst for better interaction – is best realised when its design is informed by the needs and aspirations of its users; when it is developed, in this case, with children. In fact, when children take a full part in the design of their school grounds and its realisation, they identify much more strongly with their school and to feel more fully a part of the school community.

Participation according to “Grün macht Schule”

“Grün macht Schule” (GmS) [Green goes to school], is an educational consulting centre of Berlin’s Senate Department for Education, Youth and Science. It specialises in environmental and pedagogical research, with a particular focus on the redesign of playgrounds and courtyards. Since 1983, GmS has redesigned many more than 500 schools through interventions for improving their gardens and enriching the ambience of the school grounds.

Today, children can recognize them as their habitat. Crucial to the success of these projects has been the participation of children, their parents and teachers in the redesign and subsequent maintenance of these grounds. Manfred Dietzen, landscape architect and a coordinator of “Grün macht Schule”, affirms that the starting point for school ground design should always be to listen to students’ needs, and he says their top priority is always a green space.

Through the participatory approach to planning, one can discern children’s needs and aspirations; also, through such engagement, children will feel empowered, as active citizens; part of their community. This feeling of belonging produces in them a feeling of “closeness” and belonging with the city, leading to their greater sense of responsibility for its care and protection.

When children take part in such processes, they learn to observe the world around them with critical eyes, rather than passively accepting the city as it is; they start to intercept problems and propose new ideas to resolve them. Also, children inhabit space in a completely different way to adults. Thus, engaging children in the redesign of places means receiving a new point of view, paying attention to particular details that adults cannot see. In the participatory approach to planning, children could be more serious than adults, because their interests are pure, with no profit to gain. Therefore, schools should take advantage of their most creative resource: their children. And as an extension of this, schools could be the starting point to activate a process of collaboration on developing other parts of the city.

In participatory planning, the architect, as a planner, should learn children’s language – physical and verbal – listening and observing carefully. The planner has to make workable the reflections of several actors, all of them with a different way of thinking; the planner has to be an interpreter, not simply an executor. Also, during the realisation of a project, a continual discussion between the different actors is very important.

In the Berliner experience of participatory planning, the realisation of the schoolyard is not totally assigned to construction companies; in fact, the companies operate with bulldozers for the modelling of the ground, constructing hills and slopes. Children, and their parents too, take part in the realisation with the help of experts, materialising the participatory process. This step is very important for children because it gives them an opportunity to learn and manipulate new objects with creativity.

All the Berliner schoolyards are very different from one another, but they have certain characteristics in common. One of these is the wild garden, with vegetation everywhere. Willows are particularly prevalent because they especially really robust, but there are weeds and nettles too. The vegetation attracts living creatures, allowing to children to interact with them. Wild vegetation, slopes and hidden amphitheatres create a place that is stimulating for children. Also, hiding places are essential, because children need to be far from the supervision of adults in their study breaks. Mandred Dietzen affirmed: ‘You can see the jungle in the schoolyard and the kids can go inside every time, to hide themselves; the teacher can not say “What are you doing?” because the teacher can go there, but not here, and this is an important thing’.

Water is the natural element that all children like to have in their gardens. Mandred Dietzen added on this topic: ‘guess what is the most important thing for kids? It is water. Give them a pump with water and they think “wow!!”’. In Berliner schoolyards, rainy days are one more reason to play outside. ‘A special thing is that the water from the roof and from the area goes in a big container under the floor; it is not clean, but it is a good water, and we pump it in the garden. I showed this to Italian architects and they said: “Oh my God, this is not possible!”’ (Manfred Dietzen).

In the gardens, there is also equipment for sports and large sand pits. The Berliner schoolyards offer playing and learning opportunities, where every child is able to find the most appropriate place for playtime and relaxation. At school, children, as well as studying, can finally play, explore and be outdoors, even though they live in the city. Finally, the experience of this work shows that if children spend more time playing and enjoying the outside world, they are more inclined to learn.