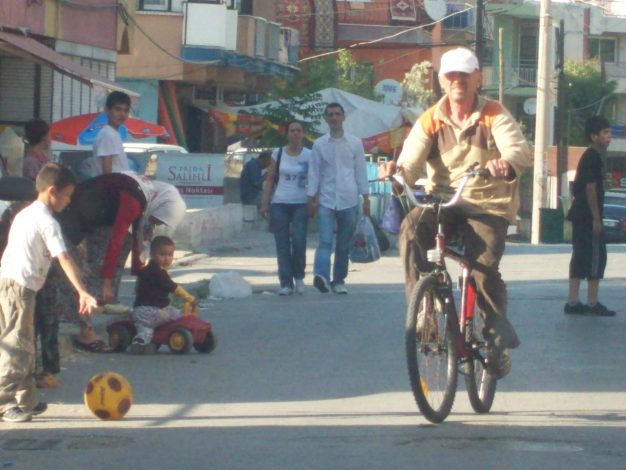 Residents of Istanbul bring play back to the street

The residents of one of the most densely populated areas of Istanbul have secured a new ‘play street’ for their children: closed to traffic and where children can again run free. A recent study of Turkish children’s use of the local environment for play, points to the need for greater traffic control and more child-friendly street designs. This is especially true in the higher socio-economic districts of Turkey, where streets can no longer be used as children’s play spaces because of the high traffic density.

Many children are prevented from playing outside in the streets where they live by poor planning, bad designs and the inadequate control of traffic (Gülay Taşçı, 2010). Therefore, children are becoming increasingly introverted as they are denied the opportunity to play outside with their friends. There are growing concerns that this is negatively affecting their health, limiting their creativity and inhibiting their social development.

In the Seller district of the European side of Istanbul, a local initiative aims to buck this trend. In the Menderes a local referendum has seen one street closed to traffic in order to provide a safe play space for children.

“Istanbul has opened its first child-friendly street playground, where parents can watch their children play via a closed-circuit television (CCTV) link”, said Mayor Tevfik Göksu during her speech at the street’s opening ceremony. “This is a great opportunity for mothers (as well as their children) as it will enable them to enjoy more leisure and personal time”. The Mayor also announced plans to paint and refurbish the street in child friendly colours and designs”.

In contrast to the relatively affluent Menderes, in the poorer residential areas, street usage is quite different. A recent study (Taşçi, 2010) suggested that although there are no regulations about using streets as shared space in Turkey, minor streets, especially in low socio-economic districts and neighbourhoods, are still being used as traditional play spaces by children.

Surveys in European Countries show that outdoor play supports the creativity and development of children more than indoor games. In European and other countries, many studies have been made of the importance of the street environment for children’s development. The aim of these studies is to identify the features needed for children to be enabled to play within the streets of their neighbourhoods; and to re-evaluate the role of streets as social hubs for society as a whole.

In consultation and participation exercises, children regularly identify the streets where they live as their preferred venue for outdoor play (Taşçı, 2010). In countries like Germany, Holland, England and Japan, traffic calming and shared space schemes have been used in some places to make this more possible. Play advocates – and millions of children and families – will be hoping that the Menderes initiative is a sustained success, and that Turkey will soon join those countries trying to reclaim residential streets for play.