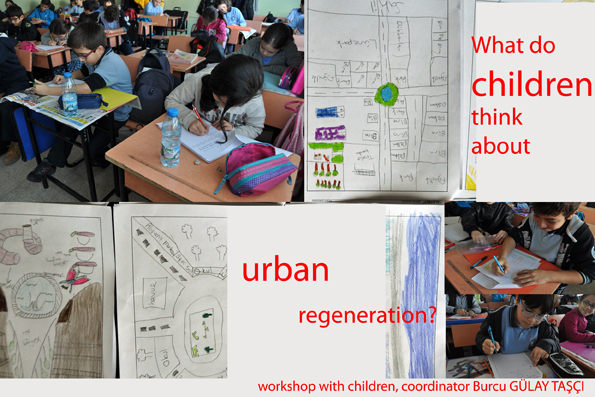 Urban regeneration processes should be planned with children

According to the widely accepted definition, urban regeneration is a holistic approach that aims to improve cities by improving their economic, physical and social environmental conditions. Yet Turkey still has various problems with urban regeneration principles, both in terms of their application to policy and their adoption by communities.

We can see various urban regeneration applications in different countries, which were shaped according to their local administrations. For example, when we analyse European countries about regeneration processes, we see that the participation of the community is a very important part of the planning process.

One big problem is that processes are still not participative enough. Another is that projects that do embrace participation are mostly adult-dominated. As a result, urban spaces are being designed by planners who are mostly uninformed about what children and young people need and want from their environment.

When we pay attention to the UN Convention on the Rights of the Child (1989), we see the importance of affording children the right to express their views on matters affecting them. The design of streets, play spaces, schools and even housing affects children in cities in several different ways. Kytta (2003) discusses some of these and argues that the built environment affects the physical actions, mental perceptions and social development of the child (Said, 2007). Gary Evans highlights the effects of the built environment on the psychological developments of humans and argues that a qualified structuring would contribute to the development of an individual (Evans, 2003).

These arguments can be expanded upon but the aim of this article is to highlight the need for improvements in our models for participation in urban regeneration processes, in order that all children and young people can be engaged in helping to shape the environments on which they depend. Urban regeneration should embrace this challenge, and engender a new generation of environmentally aware citizens (Severcan, 2012) creating liveable cities for everyone.

UN Convention on the Rights of the Child (1989), http://www.unicef.org