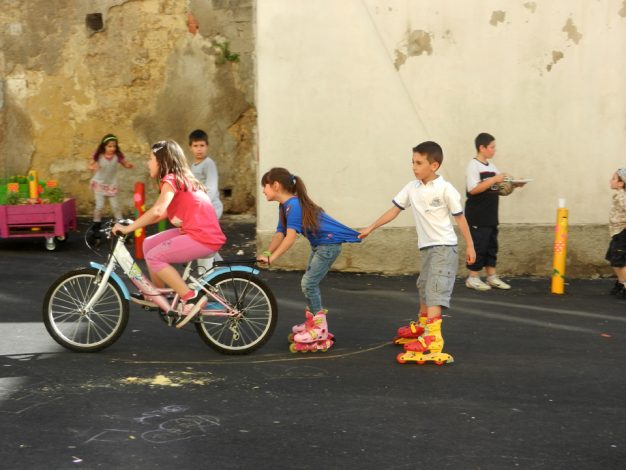 Can playing be used as a tool to reclaim cities for people; involving both children and adults in a process to re-inhabit public space? We can assert, yes, it can. The experience of “FLPP. Fronte di Liberazione dei Pizzinni Pizzoni” [Pizzinni Pizzoni Liberation Front] demonstrates it.

The project –started in 2012 and still ongoing- involves the disadvantaged neighborhood of San Donato, in the city of Sassari (Sardinia, Italy). The main goal is to free streets and public spaces from parked cars for the benefit of pedestrians and playing children..

To free public spaces from the erosion of the private car is one of the biggest challenges for urbanism. It implies always conflicts between stakeholders: children, parents, other adults, politicians, elderly people and so on. In order to reach our goal, we have decided to involve the residents of the neighbourhood of San Donato, starting from children attending the public primary school.

Involving residents is a difficult task, especially when the project must deal with the complexity of the problems of a disadvantaged neighbourhood. The “classical” approach to urban rights, liveability and the right to play would not work here. The challenge was to involve the whole neighbourhood, starting with children, without predetermining the outcome.

Working with teachers we devised a game involving all the children of the school in a single playful mobilization. We invented a dystopian tale of life in the city of Sassari in 2046, as a way of conveying to children an urgent message from the future. All the children accepted the challenge and decided to help their “great grandchildren” to reach their goal: to change this dystopian future (2046) by acting in the present (2012)! This action was simply to organize a big event where everyone could just play in their own way.

In “FLPP” project, the same event’s organisation has been managed as a game. Everyone who would get in touch with the game, would also “enter in the game”, because of its natural capacity to involve people (children of course, but not only) in a funny, curious and fresh way. So, guided by children, almost all the inhabitants have joined the cause in an informal and intuitive way, just doing what they see clearly, step by step, without any compulsion.

The first tangible result of the process has been the organisation of various urban events,. Here the inhabitants of the neighbourhood – together with municipal administrators, teachers, architects and urban planners – were “infected” by the enthusiasm of the children and have been encouraged to reclaim the “forgotten” and neglected public spaces of their neighbourhood through colouring, building by themselves small urban furniture, and above all, playing.