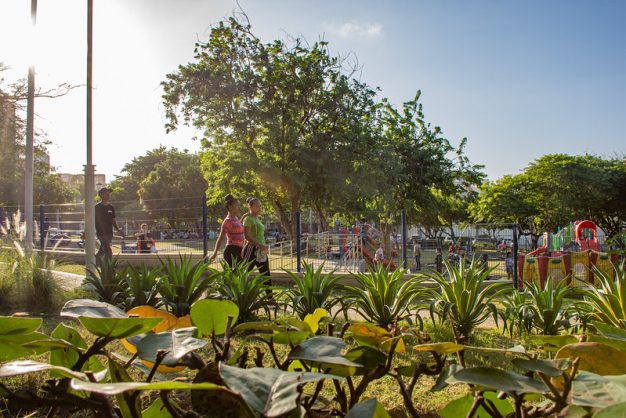 Samira Perez, a longtime resident of Barranquilla, Colombia used to spend her time and money on taxis to take her children to local shopping malls after school and on the weekends. There, they would pass the time marveling at upscale storefronts, listening to concerts and sharing meals from restaurants.

The central role of the mall in Perez’s family’s life is common across rapidly urbanizing Latin American cities, where malls often provide clean, safe gathering spaces in the absence of accessible outdoor options. In Barranquilla, where malls are ubiquitous, a 2009 public perception survey found that 90 per cent of residents were dissatisfied with public and green spaces in their city.

Todos al Parque is a finalist for the 2021-2022 WRI Ross Center Prize for Cities, showing how inclusive investment in green public spaces is an effective strategy for developing the economy, empowering marginalized groups, and building trust in public institutions.

Starting where change was needed most

In the 1970s, Barranquilla’s once-powerful shipping industry was declining, its forests were being cut down and its neighbourhoods changing in all the wrong ways. Informal settlements expanded while quality of life, public health, safety and economic opportunities declined. By the late 2000s, public space per inhabitant was less than 10 per cent of the World Health Organization-recommended minimum. Neighbourhoods with neglected parks and public spaces had higher crime rates and incidences of asthma, obesity and other health maladies.

In 2011, Mayor Elsa Noguera’s incoming administration created a program that aimed to recover 60 parks located in the city’s most deprived neighbourhoods. The program, Todos al Parque, prioritised the needs of vulnerable and disadvantaged groups, including young children, women, the disabled and the elderly. At the heart of the program was a focus on involving residents in co-designing the parks.

From the start, the program aimed to achieve a more socially and spatially equitable distribution of green space. Starting with the most underserved areas in the southeast part of the city, benefits expanded throughout Barranquilla over time. 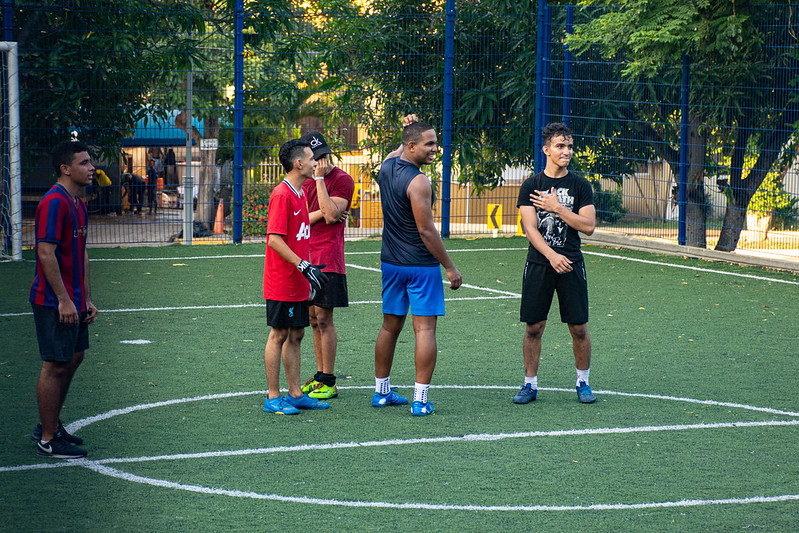 Players take a break in the middle of a soccer match at Parque Sagrado Corazon. During the planning process for each park, members of the community were invited to suggest amenities that they wanted to be included in the design, such as turf soccer fields. Photo: WRI Ross Center for Sustainable Cities

For each park, architects and community leaders discussed needs and design ideas; public representatives then met with community members in the neighbourhood where the park was set to be renovated or constructed. Community members made recommendations that were ultimately taken onboard – things like changing the surface of the soccer pitch from sand to synthetic turf, increasing the size of the young children’s playground and creating a dedicated area to host children’s programming. Before construction began at each park, organizers held a symbolic signing ceremony so residents could approve the final version.

Today, 93 per cent of Barranquilla households have a green, public space within an eight-minute walk of their homes. Todos al Parque has a presence in all 188 neighbourhoods of the city.

How did they do it?

Following the program launch in 2011, a small team appointed within the mayor’s office met with local experts, surveyed the city’s parks and researched international best practices. Tampa, Florida, a sister city of Barranquilla’s, provided inspiration. At the time, Tampa boasted 44m² of green space per person, compared with Barranquilla’s 0.86m². During a study tour in Tampa, the team learned about infrastructure, co-design techniques and practicalities about how different city agencies and contractors could collaborate.

The Barranquilla team put their lessons into practice during pilots in 2013. Mayor Noguera then set up a Parks Committee coordinated by the District Infrastructure Agency, including representatives from the District’s departments for public works, recreation, traffic and road safety, public lighting and security. 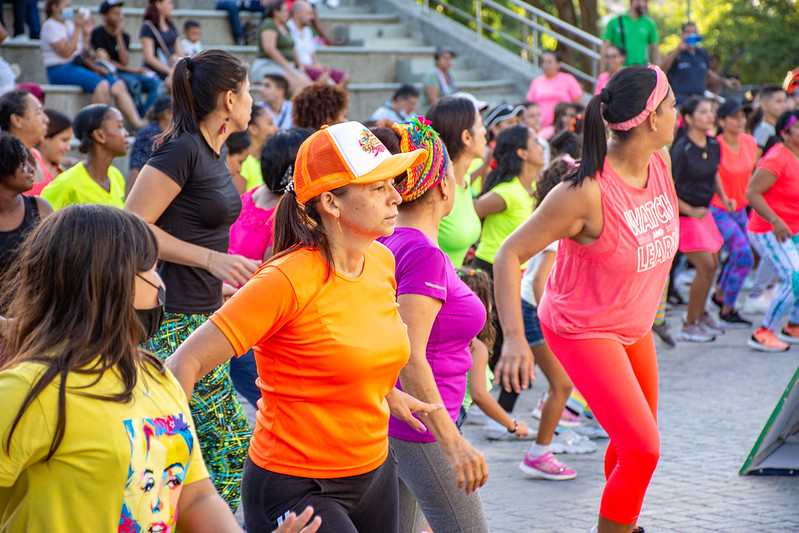 The program’s first phase of implementation in 2014 proved to be so popular the city continued it over six consecutive phases that are still ongoing today. Todos al Parque now also includes several public-private partnerships that carry out tree planting (Siembra Barranquilla), infrastructure (Puerta de Oro) and street lighting (APBAQ) projects. The city government has adopted the participatory approach for citizen engagement as a strategy across local government activity and is currently applying it to neighbourhood development plans.

Todos al Parque has undoubtedly brought benefits to virtually all Barranquilla residents. And in some cases, it has completely transformed people’s lives.

Seven years ago, Ricardo Antonio Cueto Gonzalez lost his job, home and eventually succumbed to substance abuse. For two or three years, he slept in Barranquilla’s derelict parks. “I was in a very critical situation because I had actually lost my job, and at the same time, I was homeless,” Gonzalez said. “I really don’t want that to happen to other people.” 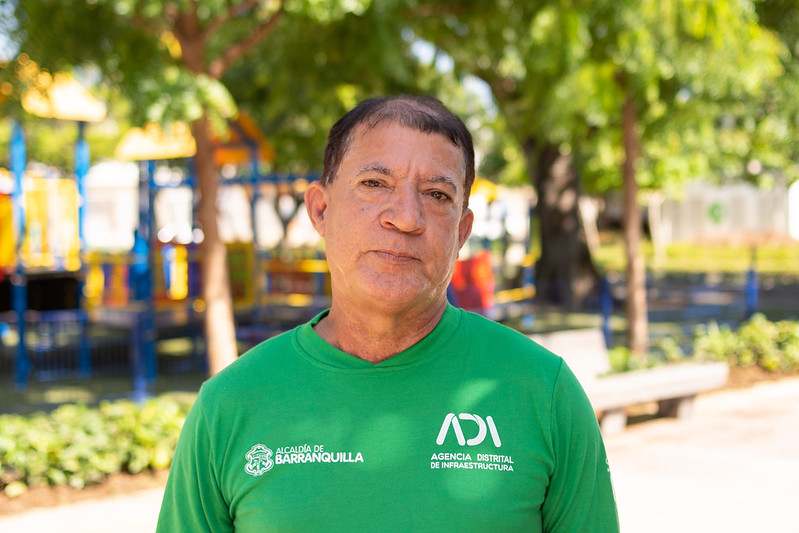 Before the parks were renovated, he witnessed drug deals and crime. One day, the director of a local homeless shelter helped change his life by introducing him to the manager of the city’s park program, Alberto Salah.

“She [the shelter director] helped me a lot,” Cuerto explained. “Thanks to my good behaviour, she helped me become a park ranger. The manager, Dr. Alberto, interviewed me, and I got the job at the park. I knew near to nothing about gardening, but I learned over time.” As a park ranger working in parks across the city, Cueto is involved in the daily maintenance of parks, including watering, garden maintenance, soil removal, pruning and cleaning.

Where possible, Todos al Parque seeks to lift up homeless people, informal vendors and residents, nurturing a sense of ownership, belonging and pride in their city’s public spaces of their city.

More than a park

In 2018, a local university found that 98% of Barranquilla residents agreed that the recovery and creation of parks improved their families’ well-being for their families. But the benefits extend beyond individuals, benefitting the city’s health, finance, employment, climate resilience and soil erosion. 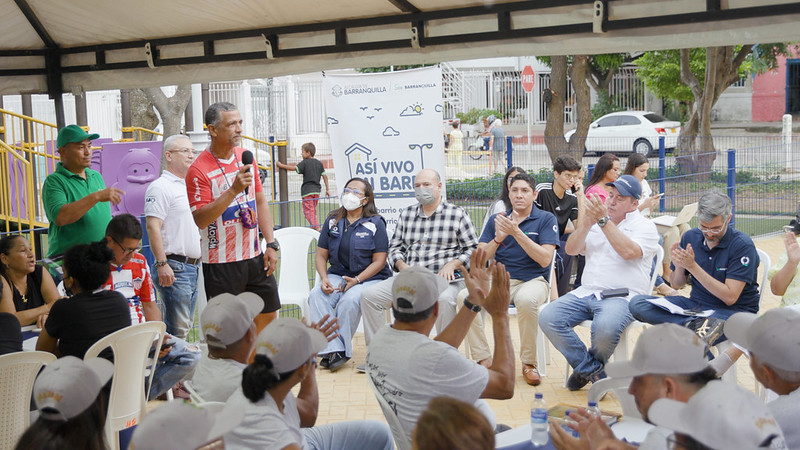 A community meeting in a park, part of the Asi Vivo Mi Barrio initiative. This initiative uses the participatory design approach pioneered under Todos al Parque to engage citizens in the planning of their neighborhood as a whole. Photo: WRI Ross Center for Sustainable Cities

Beyond Barranquilla, the program inspired the governor of the regional Atlántico Department to launch a sister program in 2020. Parques para la Gente aims to recover 311,000 square meters of parks and public spaces in 23 towns across the state. And in 2021, mayors from eight Latin American cities in Brazil, Argentina, Uruguay, Peru and Colombia signed the Declaration of Barranquilla, creating a regional network of ‘‘biodivercities’ to promote investment in green public spaces and infrastructure. The initiative is backed by CAF, Latin America’s development bank.

Meanwhile, Barranquilla’s parks are creating a new city – not just for now, but for the future.

“To me, this park [Parque los Andes] represents a lot,” said Perez. “I really like the children’s areas, the nature and the green areas, which we didn’t have before. It’s something that will be here in the future for my children and grandchildren. This park has changed my life. It has produced a sense of belonging in me and the community.”

The 2021-2022 WRI Ross Center Prize for Cities celebrates projects and initiatives showing how to live and thrive in turbulent times. From five finalists, one grand prize winner will be announced February 1, 2023.

Anne Maassen is the Global Lead for the WRI Ross Center Prize for Cities.