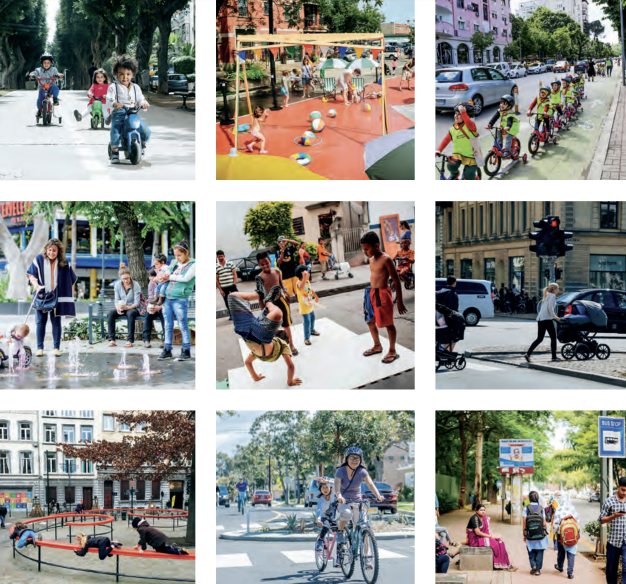 An acclaimed urban design resource which focuses on children and caregivers is now available in Spanish, making it accessible to millions more child rights champions worldwide.

Designing Streets for Kids builds upon the approach of putting people first, with a focus on the specific needs of babies, children, and caregivers as pedestrians, cyclists, and transit users in urban streets around the world.

Most streets were not built with children in mind, and current street conditions in many places are unwelcoming and unsafe for kids. Traffic crashes kill 1.35 million people every year and they are the leading cause of death for young people ages 5-29. Traffic congestion and vehicle designs can also contribute to dangerously high levels of air pollution, which is responsible for the death of 127,000 children under the age of five each year. Many of these fatalities are preventable, and these numbers can be dramatically reduced through kid-friendly street design.

‘Translating to Spanish an important step’

Translating the guide into Spanish is an important step, as some 580 million people speak Spanish (7.6 per cent of the world’s population), of whom around 483 million are native speakers, making Spanish the second mother tongue in the world by number of speakers. It is also the third-most-used language on the internet, where it has great growth potential.

This will help communicate to a much wider audience the message that poor street design also has negative consequences for children’s physical and mental health. Streets that are noisy and/or hostile to pedestrians and transit users tend to discourage physical activity, which deprives children of independent mobility and opportunities to exercise and play.

‘How to scale-up street redesign plans’

Offering detailed diagrams and rich graphics, Designing Streets for Kids captures best practices, strategies, programs, and policies used globally by cities from Bogotá to Moscow. The guide pays special attention to street redesigns in key places, such as schools and neighbourhood streets, as well as high-traffic areas including commercial streets and intersections. With a dedicated chapter on “How to Make Change Happen,” the guide also shows how to implement and scale-up street redesign plans, highlighting tactics to engage children throughout the planning process – an often-overlooked approach that can dramatically transform how streets are designed and used.

Skye Duncan, Executive Director of GDCI, said: “With the translation of this award-winning publication, millions more “Reliable mobility options and access to safe, healthy streets is a human right, and Designing Streets for Kids provides actionable strategies for ensuring equitable access to these vital public spaces. People across the globe can access this information in their native language, helping to ensure that more kids survive and thrive on their local streets.”

‘Opens the door for decisions to be made’

Cynthia Viteri is the Mayor of Guayaquil, the second largest city in Ecuador. She welcomed the publication, saying: “Guayaquil has great commitments to its children, one of the most important is to provide them with safe spaces for their mobility and recreation. The Spanish translation of Designing Streets for Kids opens the door for decisions to be made on road safety projects and programs proposals based on the needs of children as one of the main users on our streets.”