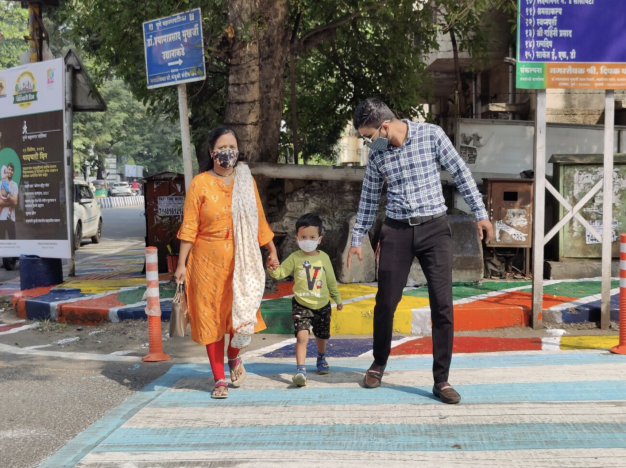 Urban95 ‘phase two’ up and running in Pune

The Indian city of Pune is rolling out the next part of the acclaimed Urban95 programme that looks at cities’ infrastructures through the eyes of a young child.

Focusing on child and family-friendly features in public space, mobility and transport, neighbourhood planning and early years services, the project will see local teams scaling up ideas that have already been well received.

Urban95 is one of the cornerstone policies of the Bernard van Leer Foundation, and it is continuing this work in partnership with the urban engineering firm Egis International and Egis India. It’s now the second city in India, after Udaipur, to move to Urban95 phase two level.

One such example of measures that have implemented is the introduction of low-cost actions at a major junction in the city, Godse Chowk, such as using potted plants to help distinguish the space between pedestrian and vehicular spaces, painting vibrant designs on the walls by footpaths to draw attention to the junction, as well as marking positions for proposed new street lights and traffic signals.

Urban95, with the help of the Maharashtra Housing Board, also recently established the city’s its first-ever sensory garden. It is designed for toddlers, and includes sand and mud play areas, flora and fauna, and seating for caregivers with drinking water and a toilet.

Rushda Majeed, India’s representative with the Foundation, said: “During the first phase of Urban95, we saw many successes, including enthusiastic response to the initiatives by citizens. We now hope to carry the learnings into the second, scale-up phase. Pune is an Urban95 lighthouse city, and we remain grateful to the Pune Municipal Corporation for its commitment towards a child- and family-friendly city.”

Vikram Kumar, Municipal Commissioner, Pune Municipal Corporation: “We are proud that our partnership with the Bernard van Leer Foundation to make Pune a lighthouse city, to demonstrate and adopt child- and caregiver-friendly urban development, is progressing to the second phase of scaling up the ideas pan-Pune.

“I am sure that the Urban95 programme will make Pune city more accessible, safe, playful, green and inclusive for children and their families through scaling up various neighbourhood-level amenities into infant, toddler and caregiver friendly services. This will truly make Pune a child-friendly city and will work as a lighthouse city in India.”