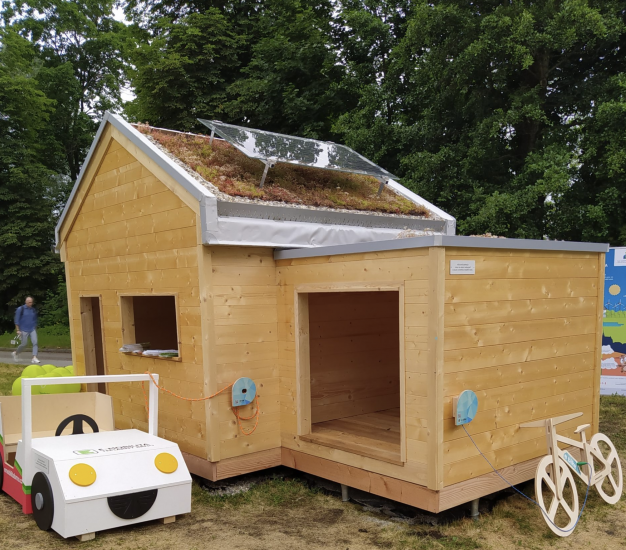 The importance of sustainable architecture – for children

Why do cities overheat? That’s one of the questions being addressed by educators in the Czech municipality of Brno as they teach children about sustainable architecture.

The importance of sustainable architecture has become a widely discussed topic around the world as people have recently begun to understand its value and importance.

As part of the second year of the Festival of Architecture 2021, Brno has utilised the HQ of the municipal police by opening an educational trail, ‘When buildings work with nature’, which shows children how building sustainably influences the future of our cities.

It presents children and adults with the influence of architecture and construction on the future of the city. Get to know the green roof and walls up close, the production of electricity from the sun, the conversion of waste into building materials and other steps that lead to improved cooperation between the builder and nature.

The entire trail was created with the significant support of the Department of Motivational Programs of the City of Brno and will be located in the area until the end of September this year. The house with a green roof, as a play element for children, will remain located at the traffic playground even after that.

The trail explores several subjects, including why cities are often warmer than the countryside. In other words, children will understand how walkways made of certain materials such as concrete can result in high temperatures while greenery absorbs heat. What is more, they will also be taught about the production of electricity and the conversion of waste into building materials.

One of the most impressive structures from the educational trail is a large house with a green roof and photovoltaic panels. With this structure, children are shown how the panels can charge electric bicycles. In addition to this, the house contains an adjacent tank where rainwater is collected for future use.

A house with a green roof

Essentially, the educational trail seeks to teach children how electricity can be obtained from the sun and why it is better than using coal. Although “When buildings work with nature” will be open until the end of September, this particular house will remain for a longer period of time.

“When buildings work with nature” has been created alongside the Department of Motivational Programs of the City of Brno. Undoubtedly, the educational trail will inspire children to think about the importance of sustainable actions in other areas besides architecture. In this way, they will grow up to make choices that benefit the city and the planet.