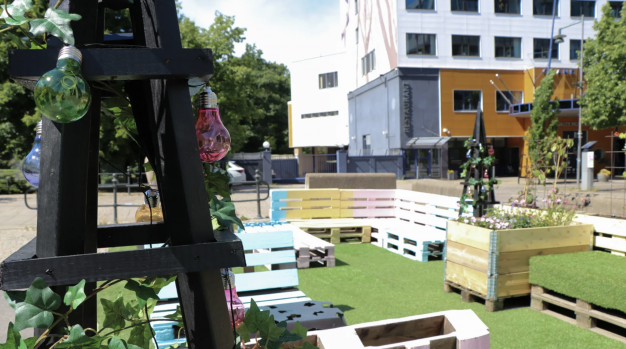 The Swedish city of Borås is home to a new ‘pocket park’, aimed at and designed and built by a group of young people.

As part of a project with the five-kilometre-long Viskans Park, the city has built up several different temporary park solutions around the Hallberg Bridge area. This is the result.

A few weeks ago, Clara Holmgren, Elina Sämfors, David Krantz and Victor Persson were strangers. All they had in common was that they had applied to be Young Municipal Developers and wanted to work with the project Build a pocket park.

‘They investigated what young people want in a park’

They started to investigate for themselves what young people want in a park, by sending out a questionnaire and also standing on Hallbergsplatsen and talking to people who passed by. Based on the answers and inspiration they found on the internet and in the physical urban environment, they produced sketches. With the help of recycled materials that the municipal developers built and repainted, they realised their visions. In less than three weeks, an empty and paved surface was transformed into a colourful and inviting place to relax.

They’ve now presented their work to city officials, who are delighted with the results. The city says that young people’s surveys and conclusions will be of great help in the continued work with Viskans park.