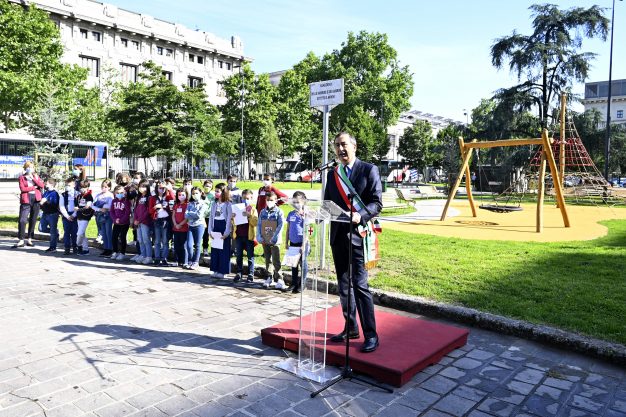 Milan has unveiled a dedicated play space for children in the middle of the city to mark the 30th anniversary of Italy’s endorsement of the United Nations Convention on the Rights of the Child.

Named ‘Garden of girls and boys from all over the world’, the new area dedicated to children and their carers is in Piazza Luigi di Savoia, and has the support of UNICEF.

The inauguration took place in the presence of the Mayor of Milan, Giuseppe Sala,  and pupils from ICS primary school Ciresola.

The city says it is its ‘duty to guarantee citizens opportunities for socializing and entertainment, in safety and in compliance with the law’, and this particular scheme, named the ‘Cantiere Centrale’ project, was borne out of a partnership with two local neighbourhood associations, Municipio 2 and Grandi Stazion.

‘Instil in young people an appreciation of urban greenery’

“The garden of girls and boys around the world underlines a commitment that we have made and that we intend to honour in the best possible way, to improve the quality of life of those who live and frequent this neighbourhood,” said the municipality.

With UNICEF’s help, the garden will be transformed through various initiatives aimed at children and families that raise awareness of the rights of less privileged children who are forced to grow up in foreign environments and far from their native place. Another key aim is also to instil in young people a sense of appreciation, respect and care for the urban greenery, and environmental sustainability.

Pierfranceso Maran, a Milan city planning councillor, said: “We are very proud of a project that changes the face of the square by focusing on the right to play for all children and helping to regenerate the neighbourhood around the station and centre.

‘Focusing on the right to play for all’

“We wanted to inaugurate the garden as a symbol of rebirth and hope; with the support of UNICEF we take up the challenge to transform this space into a place of light-heartedness, but also of spreading universal values and rights among the new generations.”

Speaking at the opening on May 27, Alberto Colorni, President of the UNICEF Provincial Committee, said: “This is an important day for UNICEF, this year in particular because it marks the thirtieth anniversary of Italy’s ratification of the Convention on the Rights of the Child.

“We are therefore particularly happy with the permanent patronage that UNICEF provides to the garden that is being inaugurated today and for which our thanks go to the Municipality of Milan. We hope that the garden, designed for use by boys and girls, will become a place to organize events and activities that promote the rights of the under 18s.

“In this sense we have been and will be involved: we would like to develop initiatives with girls and young people who will live in this place and personalize the garden with their ideas.”