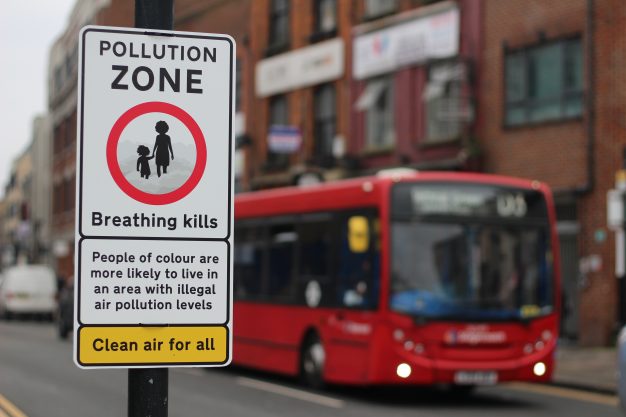 With air pollution rates in London shown to be disproportionately affecting black and minority ethnic youngsters, a group of teenagers are taking direct action to raise awareness by putting up officially-sanctioned protest signs across the capital.

‘Choked Up’ is a youth group which has installed a series of ‘hacked’ road signs, emblazoned with ‘Pollution Zone’ and a warning that ‘Breathing Kills’. They are being installed in areas found to have particularly toxic and harmful levels of air pollution.

They coincide with new findings from Environmental Defense Fund Europe (EDF Europe) showing the burden of London’s air pollution is not equal. Nitrogen Dioxide (NO2) pollution is, on average, 24-31 per cent higher in areas where people from black, asian or minority ethnic backgrounds are most likely to live, compared to areas where white people are most likely to live.

It is the latest in a series of campaigns by EDF, which recently revealed that in London alone, over 47,000 children to go state primary schools located within 100 metres of the city’s ‘Red Routes‘, a network of busy roads that produce higher-than-average emissions.

Choked Up is a youth organisation set up by BAME teenagers who live along highly polluted roads in South London, and who are especially concerned about the lack of sufficient action, care or intervention on air pollution. It follows the recent inquest into the death of nine-year-old Ella Kissi-Debrah, which found that toxic air directly contributed to her death.

Anjali Raman-Middleton, a 17 year- old co-founder of Choked Up, said: “The landmark ruling of the Ella Adoo-Kissi-Debrah inquest proved that the road I live less than five minutes from can kill. I am terrified that my daily commute to school along the South Circular has already had a negative impact on my lungs. I urge London mayoral candidates to commit to transform these roads to give me and my generation a greener future.”

A group of around 100 London health professionals who work in the NHS have backed the call for action with a letter warning that air pollution is having a “devastating impact” on health, particularly with various communities of colour and those from deprived backgrounds. Ahead of the London mayoral elections in May, the joint letter asks candidates to commit to tackle air pollution inequalities and develop an “urgent action plan to…reduce our dependence on cars.”3

The letter was coordinated by Medact, a coalition of health professionals campaigning on health inequalities particularly linked to the environment.

Dr LJ Smith, Respiratory Consultant at King’s College Hospital, representing Medact said: “The levels of air pollution across the capital are nothing short of a public health emergency. There are far too many people in our hospital wards and clinics who might otherwise be healthy if it wasn’t for the toxic air they breathe.

Air pollution affects every single one of us from birth to old age, but we know the least well off and marginalised communities, including those from Black and Asian backgrounds are being hardest hit. If we are serious about tackling health inequalities in our capital city, we need to urgently address the air pollution crisis. We are emerging now from one of the worst health crises this country has ever faced and are now sleep-walking right into another one. Action we take today will have immediate benefits. This can’t wait.”

Air pollution takes a huge toll on the health of Londoners, with an estimated 4,000 of the capital’s residents dying prematurely in 2019 from air pollution. Studies show living with dirty air also increases the risk of heart disease and heart attacks, as well as stunts lung growth in children.5

But the health impact of air pollution is not evenly felt. In Tower Hamlets, for example, air pollution is among the worst in London, and asthma hospital admissions for young children are 42 per cent higher than the England average.

Call for next London Mayor to transform the Red Routes

The hacked signs have been placed on the capital’s Red Routes network, which was established in the early 1990’s to improve traffic flow across the city and is currently under the Mayor’s control. These major roads account for around 5% of London’s roads but carry up to a third of London’s traffic on an average day. The Red Routes network has led to an unequal health burden in the city with Londoners living, working, and going to school near these roads breathing higher and often illegal levels of air pollution.

Campaigners are urgently questioning how the Red Routes fit with a cleaner and greener London as the city recovers from the pandemic. They are calling on mayoral candidates to reduce health inequities by committing to transform these roads, which will demand a fresh approach to freight and firm targets to reduce car use in the capital. Rethinking the Red Routes will require a world class walking and cycling network, as well as affordable and accessible zero-emission public transport.

“For years, the major ‘Red Routes’ have been a toxic thread running through our communities, polluting the doorsteps of homes and kids’ playgrounds. We need a green recovery that undoes decades of damage, using a clear traffic reduction plan – one where polluting trucks can no longer cut across the city and parking for cars becomes parks for people. As we approach the mayoral elections we are asking candidates to commit to transform the Red Routes road network, putting people’s health and our climate first.

“We are calling on all of the London mayoral candidates to make three bold manifesto commitments for a cleaner, brighter London: rethink the harmful Red Routes, expand the Ultra Low Emission Zone and deliver a zero-emission bus fleet this decade.”

NO2 pollution forms when fossil fuels such as coal, oil, gas or diesel are burned at high temperatures. It can cause reduced lung function in children, trigger asthma attacks and hospital admissions for children. Recent studies have linked the pollutant to lung cancer, cardiovascular harm, lower birth weight in newborns and increased risk of premature death.

PM2.5 pollution refers to very fine particulates – with a size generally less than 2.5 micrometres (µm). It is contained in pollution from petrol and diesel vehicles as well as woodsmoke and industry. This microscopic material when breathed in can penetrate deep into the lungs and can then be absorbed into the bloodstream. This form of pollution is associated with health conditions such as heart disease, stroke, lung cancer as well as diabetes and dementia. High levels of PM2.5 pollution can trigger asthma attacks, heart attacks and other serious medical emergencies, and has a long term impact on lung function particularly in children.11