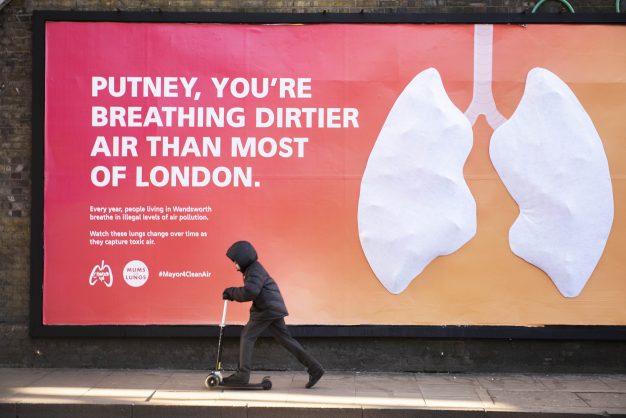 In the week that primary school children in England return to the classroom, environmental campaigners have warned that thousands of youngsters are being exposed to dangerous levels of air pollution because their schools are located close to a major road.

Major roads are responsible for huge health impacts in London, with people near these roads breathing levels of nitrogen dioxide (NO2) that are 57 per cent higher and fine particulate matter (PM2.5) that are 35 per cent higher than an average road in the capital.

‘Everyone needs clean air to breathe’

Ahead of the city’s mayoral elections, environmental campaigners are urging all candidates to commit to safeguard the expansion of the Ultra Low Emission Zone and to transform the Red Routes.

Heading the campaign is Mums for Lungs, a group of parents who live near polluted roads in south London, and ‘Choked Up’, a youth group of black teenagers who also champion the need for cleaner air. They are supported by EDF, an international charity, and Medact, a group of health professionals which campaigns on health inequalities linked to environmental effects.

David Nicholson, a member of Mums for Lungs, said: “As a dad, being next to the exhaust of a diesel vehicle feels like a stranger you’ve never met before forcing your family to smoke a packet of cigarettes. That’s why I think the next Mayor of London must commit to make our air healthier to breathe.

“Driving a diesel in cities means everyone outside your car or van has to inhale your toxic exhaust as you drive. I think it’s time to stop burning fossils, dump the pistons and stinky exhausts and embrace the future by switching to clean electric cars or bikes. Everyone needs clean air to breathe, including me and my family.”

Nyeleti Brauer-Maxaeia, a 17 year-old co-founder of Choked Up: “We took action so that lawmakers, decision makers and politicians finally take this climate and air quality crisis seriously, for everyone’s sake. The next Mayor of London needs to expand the ULEZ and rethink TFL’s Red Routes so make sure everyone in the city can breathe clean air.”

Oliver Lord, Head of Policy and Campaigns at EDF Europe, said: “Kids in London have been breathing illegal levels of air pollution for far too long, and not just in the city centre. Exposure to air pollution at a young age can irreversibly stunt children’s lungs and create health problems for the rest of their lives.”

Children going to school in one particular corner of London will soon be greeted by a stark poster installation in the shape of a pair of giant, artificial lungs which will change colour from white to grey as pollution levels increase. The advert will be placed on Upper Richmond Road, a Red Route, near to Putney High Street, an area which continues to breach legal limits for NO2 air pollution. It borders the planned expansion of the Ultra Low Emission Zone on 25 October 2021.

‘Artificial lungs which change to grey as pollution increases’

But these lungs are just the first in a series of interventions planned ahead of the mayoral elections intended to raise awareness of the ongoing risks of air pollution. An estimated 4,000 Londoners die prematurely every year as a result of the health impacts of air pollution.

In December a coroner in London delivered a landmark ruling that nine-year-old Ella Kissi-Debrah, who died in 2013 after an acute asthma attack, was the first person in the UK – and possibly the world – to have ‘excessive air pollution’ recorded as an official cause of death.

She had lived very close to one of London’s main arterial roads, and over several years had been breathing in toxic fumes produced by traffic. Her mother is campaigning for changes to international laws so that governments will be forced to better protect future generations from the effects of traffic pollution.

Living near busy roads in London may stunt lung growth in children by 12.5 per cent and can increase adult’s risk of coronary heart disease by 6.3 per cent. The Mayor of London’s Red Routes network, managed by Transport for London, accounts for around five per cent of London’s roads but carries up to a third of London’s traffic on an average day. These major roads will likely be some of the last areas in the UK to meet legal air pollution limits, which should have been met over a decade ago – in 2010.

‘It can cause reduced lung function in children’

NO2 pollution forms when fossil fuels such as coal, oil, gas or diesel are burned at high temperatures. It can cause reduced lung function in children, trigger asthma attacks and hospital admissions for children. Recent studies have linked the pollutant to lung cancer, cardiovascular harm, lower birth weight in newborns and increased risk of premature death. NO2 also forms chemically in the atmosphere from nitric oxide (NO) which is also produced by fossil fuel combustion. NO2 and NO are collectively known as NOx.

PM2.5 pollution refers to very fine particulates, with a size generally less than 2.5 micrometres (µm). It is contained in pollution from petrol and diesel vehicles as well as woodsmoke and industry. This microscopic material when breathed in can penetrate deep into the lungs and absorbed into the bloodstream. PM2.5 pollution is associated with health conditions such as heart disease, stroke, lung cancer as well as diabetes and dementia. High levels of PM2.5 pollution can trigger asthma attacks, heart attacks and other serious medical emergencies, and has a long term impact on lung function particularly in children.