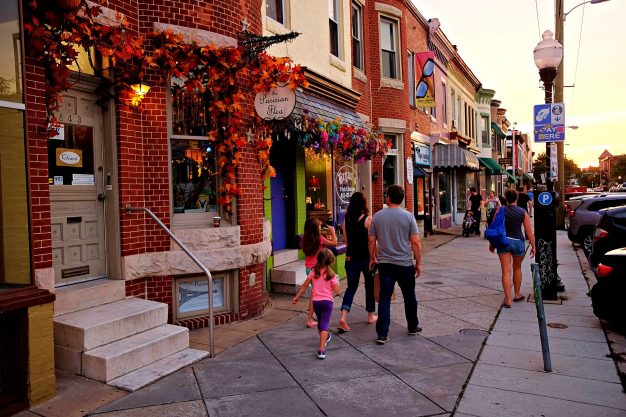 Re-imagining Baltimore as a ‘city for children’

Imagine, for a moment, what an ideal Baltimore City would look like. Who would it be for? What qualities would it have? With so many deep-set, interconnected challenges in our city it is hard to know where to begin.

In fact, this may be the fundamental problem: that we are so overwhelmed by the depth and range of challenges — from poverty to racism — that it is hard to know where to invest our resources to strategically make real systemic change. What we have instead is an earnest, yet diffused set of strategies that are together inefficient, uncoordinated and mostly impotent against the reality we face, writes architect Davin Hong.

I propose we consider a simple image that sets a vision for what an ideal Baltimore should look like, and collectively work toward that vision. That is, imagine Baltimore as a city for children, where children are safe and where they can thrive.

And if we put children first, what would be the result?

And if we put children first, what would be the result? They would be accepted, nurtured, fostered. Moreover, their interests would drive public policy as well as the priorities of institutions, nonprofits, grant-makers, communities and each one of us.

Schools would come first and so would wraparound programs for kids and families with strong management and funding that attracts the best and the brightest talent in the country. Neighbourhoods would be stronger as residents, programs and police work together to protect youth at all costs. Streets would be safer with a thoughtful system of slow streets, pedestrian paths and bike lanes that opens up the city to belong to everyone. Parks would be plentiful, well funded and well maintained as wonderful places for play. Robust recreation would be a priority for all children regardless of wealth. Natural environments would be expanded and enriched to provide children the experience of biodiversity and nature. Children would be exposed to knowledge, arts and culture to find richness and complexity to life. Internships would be a norm promoted by every business. And men and women everywhere would step up to ensure that every child receives a good mentor.

‘..Making Baltimore a city for children has to be more than a slogan’

Finally, parents would be supported, because as we all know, it takes a village to raise a child. Job training and placement would be expanded and made more accessible. Families would have fresh food on the dinner table and access to quality health care. And behavioral health would be considered a public health issue that is properly resourced and managed to help every parent be there for their child.

But for us to get there, making Baltimore a city for children has to be more than a slogan and more than business as usual. We would have to see this as a matter not just for government or nonprofits, but for all of us. We as a city and we as individuals have to decide to put kids first, to build healthy relationships with them, to look out for them and to make sacrifices for them. Imagine if everybody looked out for the kids they encounter, seeking out their well-being, however brief or long the relationship. Imagine what a difference that would make to how they understand the world around them.

With COVID-19, cities everywhere are not the same. Beyond the economic impact, we have been deprived of how we fundamentally relate to one another as social creatures. When we come out of this pandemic, will we be changed or will we be the same? Will we seek to value the patterns of life and social interactions that we have so missed? Will we be a new people who have learned to put people first? Can we change how we behave and make Baltimore the place we long for it to be? The year 2020 was the worst in recent memory for many. But now we have a new president and a new mayor, and we have vaccines.

There is a lot to hope for, but only if we can see this as an opportunity for a fresh start. Let’s make Baltimore a city for children: If our city is good for children, it’s good for the rest of us, too.

This article was first published in The Baltimore Sun on 5 January 2021.