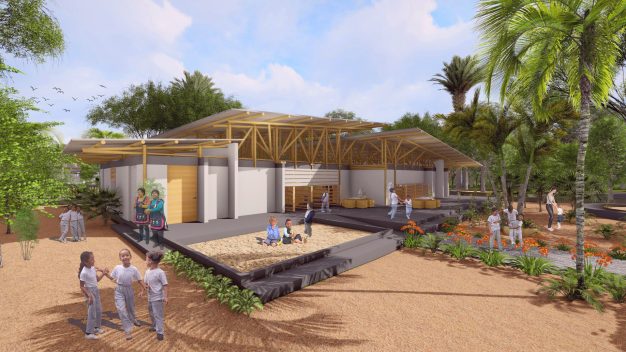 The first participative design for sustainable public schools in Ecuador

A truly collaborative process is the only way to describe the Nueva Escuela project in Ecuador, which has seen school pupils and their community play a central role in the design of a sustainable school. More importantly though, it can be seen as a beacon of good practice for others to follow. Architect Amanda Padilla, who is passionate about designing schools that involve participatory design processes, tells Child in the City all about it.

“Between 2007 and 2017 the Ecuadorian government made extensive investments in public infrastructure. Following those investments, the Ministry of Education, concerned by the need for school infrastructure in many regions of the country, aimed to build more schools. In 2018, failing standardized schools in all climate regions and cultures led to a radical decision on forthcoming projects,” says Amanda.

“The Nueva Escuela plan emerged as a proposition for new public schools to be built with a sustainable approach. Some of its novel features were collaborative community processes in rural and urban areas, unique schools for specific climate zones, the use of local and environmentally-friendly construction materials, design elements to make progressive improvements to teaching and learning, and a pilot project in a rural area developed by a multidisciplinary external team of consultants.

“The pilot project took place at the Batalla de Pichincha school in the village of Zapallo, Esmeraldas which has fewer than 500 students. The local climate is hot and humid with heavy precipitation during the winter months. The site is surrounded by palm oil farms, a main source of income for the region. The town of approximately 2,000 people lacks adequate public infrastructure, especially educational, which spurred on community members to advocate for improvements.

“The area around the school is uniquely and abundantly green. It is covered with enormous trees and fruit orchards planted by the agricultural science students, boasts a ‘TINI’ space – a community gardening project for small children implemented by the Ministry of Education – and has a river that flows through the whole area that provides both freshwater and a public space for swimming and recreation. However, the lush natural landscape contrasts with the poor physical conditions of the school buildings. In winter, strong rains cause roofs to leak and flooding which damages and prevents suitable classes. Student attrition over the past few years has increased as a result.

“The pilot project aimed to change these precarious conditions by involving the community, students and teachers in the design of the new school. At first they were cautious because of the unreliable record of previous government interventions but, over time, opened their minds thanks to the collaborative workshops held by the team.

The team began by initiating site visits to map both the green and built environments in order to try to understand the current conditions and by giving questionnaires to survey certain social and educational issues. The surveys showed that even though a majority of people living in the town, 58.8 per cent wanted to leave due to the lack of career diversity and job opportunities. Most students envisioned a future working in agriculture and expressed a desire for different kinds of classes, such as art, technology and economics. 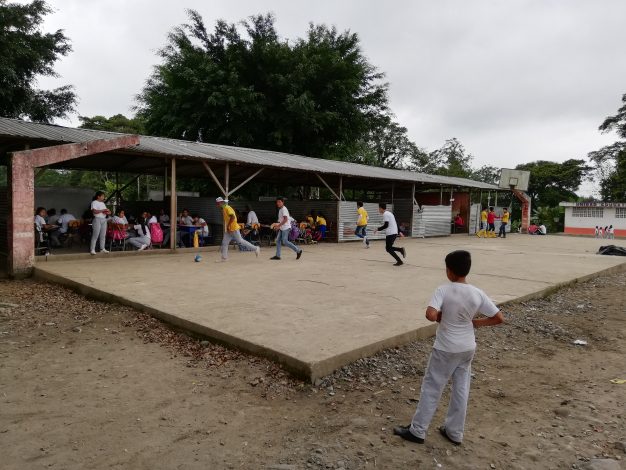 “The surveys also revealed that the community at large had a great interest in enhancing the role of school infrastructure as a means of improving quality of life and for hosting social activities. In general, they conceived of better social engagement through community assemblies and ‘mingas’, an indigenous term for a communal work group that repairs public infrastructure, like, for example, the school.

“In later visits to the Zapallo community, the team pitched the Nueva Escuela Plan by demonstrating the potentialities of a sustainable design proposal. It focused on novel pedagogical strategies for gender equality, levelling relational dynamics between students and teachers, and the tremendous advantages of developing a community design process where all social actors are involved. Two more polls were developed: one for selecting the type of school they wanted (temporary classrooms versus a long-term building), and another to choose the location (a flat empty plot versus the existing school site). After this democratic decision-making exercise, the design process was initiated.

Community participation in the process

“The next workshop aimed to create an urban map of Zapallo´s urban infrastructure as a way to understand the public network, its relation to the school, and whether to integrate certain activities into the future project. The map showed that some buildings had been abandoned while others became meeting spots. Additionally, the map showed other public infrastructure to be deficient for community needs. For example, the town experienced poor internet connection and accessibility, a lack of waste management, and a weak transportation system for travelling between towns. 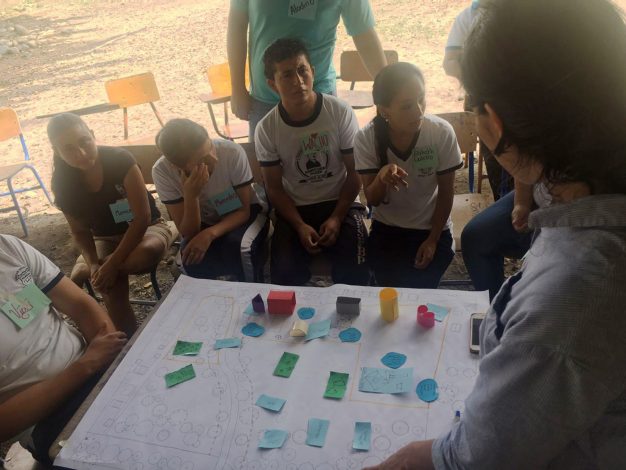 “The workshop was then divided into age groups to design the school’s master plan. Participants used cardboard elements to propose exact locations for all school buildings. Small children and their teachers wanted distinct features, including a private site with limited access to the river, a natural or artificial separation from the other classrooms, and updated design, location, and quantity of bathrooms. Older students imagined sports facilities, an increased area for the fruit orchard, and appropriate laboratories for agricultural and technological purposes.

“Notably, all students cited problems with the bathrooms in the original school, which had only two. Concerns included security, cleanliness, and the quantity of toilets. Also, all students agreed on the unique opportunities the natural environment provided, such as having the river as a public space, using the trees as shade elements, and cultivating the fruit orchards for income. Finally, everyone considered the library and the entrance courtyard as spaces for supporting community needs and activities.

“Separate from the pilot project, community members of Zapallo took part in additional bamboo-related workshops organized by various organizations. Also, the engineering advisor explained the benefits of the renewable crop as a structural material. A few participants were initially skeptical about bamboo structures based on pre-established biases, but became supportive after an intensive dialogue that included technical expertise. Unexpectedly, some carpenters and construction workers from the community who participated, brought back with them new ideas for using extant bamboo growth around Zapallo for revenue.

“In the months following, the team presented the final architectural proposal including physical models, photomontages, and the masterplan of the school. At the same time, the now-engaged students participated in another workshop to help design the school’s exterior spaces and recreational areas. The community was convinced about this new project and wholeheartedly supported it despite having concerns about the construction start dates and duration. The students were emphatic about it, continually asking about the bathrooms and imagining themselves playing in the new recreational spaces. Moreover, these final workshops confirmed the acceptance of the project by the community and the success of the process for increasing community engagement. 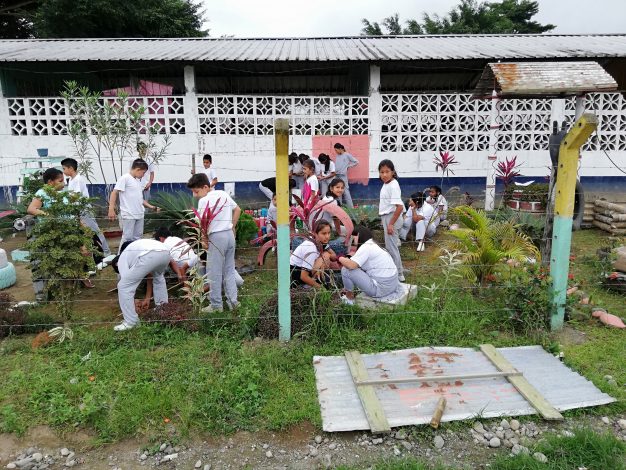 “In December 2018, the architectural design of the pilot project and the school guidelines were delivered by the multidisciplinary external consultant team that I collaborated with. Importantly, it motivated the implementation of the Ministerial Agreement for Sustainable school design in Ecuador in 2020. Despite those achievements, two years have passed, the already precarious school infrastructure has deteriorated further and the community is still waiting for a governmental response.”

Amanda concludes: “Neither the consultant team´s close relationship with the community nor the positive results from the process have made the Ecuadorian government act on the needs of Zapallo´s people. In the future, the school will be the heart of the community, giving them spaces that work together with pedagogical changes for a collaborative learning process.”

Text and by Amanda Padilla. Images by Nueva Escuela Team 2018.