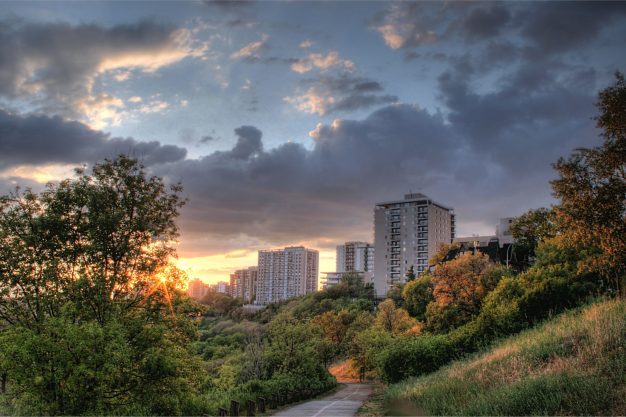 Coronavirus lockdowns have taught us the importance of having wild areas for children. We should build on this and create a comprehensive strategy to rewild our cities, says architect Cristina Monteiro.

“The lockdown has brought about a seismic shift in the way we think about space in the city. It became obvious that a lot of our urban environment is not green or accessible enough and we have seen the negative effects on our health and wellbeing, particularly in more deprived areas of our cities,” she says.

“Learning from the lockdown and the struggles for public space and education that it led to should inspire us to rewild cities to better support our children.

“During the first UK lockdown, my family were lucky enough to have easy access to the countryside. The anxieties of the Covid-19 pandemic were alleviated to a huge degree by the ability to explore this environment with my five-year-old daughter. The woods around us provided a safe and exciting place of learning that was a welcome alternative to the kitchen table.

“What would it take to retrofit our existing towns and cities to make access to woodland an easy, natural part of a child’s education? We would need to create a 0.5-hectare area of woodland – the minimum size for a viable habitat according to the National Forest Inventory – within easy reach of every school. Creating this wild, green space would align directly with the ‘rewilding’ agenda.

“Most communities want to be more sustainable, have access to clean air, clean energy, green spaces, and a natural world. Green Party MP Caroline Lucas has been campaigning for the UK government to set legally binding targets for access to nature for all, building on mountains of evidence linking contact with the natural world to our mental and physical health and wellbeing.

“Environmental conservation practices in the 20th century were highly target-based, with projects that concentrated on particular species and monitoring and adjusting environments to achieve a target. Rewilding, as we can see in the work of Isabella Tree and George Monbiot among others, fundamentally challenges that approach and instead invites ecologists to create a framework on which nature is allowed to evolve and take its course.

“This new approach is gaining popular traction, with books on rewilding and nature, in general, dominating the non-fiction lists at the moment, reflecting a long-term love for nature in European culture but also a popular moment where exploring wild places and achieving a sense of awe and freedom feel vitally important.

“When we think of this concept in cities, we are not of course excluding people from the wild but making environments where human activity is not the dominant force.

“The idea that learning “in the wild” is of value to a child is embodied in the Forest School movement. Though tested in diverse ways across Europe in the early twentieth century, the first formal Forest School was set up in the early 1950s by Ella Flautau in Denmark. Today, models based on hers are adopted across the world, often taking the form of occasional sessions in woodland locations as part of the mainstream curriculum. For urban children, this experience is often in nearby parks or nature reserves.

“Today, we understand that this aspect of education has huge psychological benefits, as explored by Richard Louv whose book Last Child in the Woods, which draws parallels between the rise of numbers of children with health conditions such as attention deficit hyperactivity disorder (ADHD) and limited access to nature in urban and even suburban contexts.

“Children in urban areas – and particularly deprived areas – have limited access to real nature. East London, for example, has seen huge development in recent years that is eroding the amount of wasteland and slack spaces in favour of much-needed housing. Whilst the housing is certainly needed, we also need a more focussed audit on green infrastructure, wild spaces and green amenity than currently happens in urban places today.

“Local authorities, schools, landowners and the wider community should be coming together to explore how nature can be intensified in their local area.

“Whilst urban dwellers can enjoy a flourishing weed or a small piece of urban wildness in a verge or pocket park, and they have value to the ecological richness and environmental quality of the city, these spaces do not offer much in terms of a genuine experience of wildness and are often inaccessible or overly “maintained” by maintenance contractors with heavy machinery such that their natural diversity is limited.

“Arguably there are tensions between the rewilding of parks and open land and the anti-social behaviour that might thrive in “wilder” landscapes. My daughter reported a successful Forest School session recently where nobody found a syringe. It might be that the best places to enrich and wilden the city are pieces of currently inaccessible, under-accessed and unprogrammed space where the environmental and social benefits of this approach might be most profound and cause the least conflicts.

“By working collectively, we could build relationships of care between schools and existing spaces and flip neglected spaces into ones that are loved and well-used by local children and which contribute far more to the ecology of the city. A precedent for this is Phytology in Bethnal Green, London: a wonderful example of a tiny slither of land becoming a much-loved intense nature reserve with a wonderful collision of programmes, mixing the arts and environmental education in an informal but curated way and where nature is the dominant quality. It is simultaneously an adventure in wildness for a child and very safe.

“Design in this context can be important in various ways, from advocating for wild spaces and ecological richness at the strategic scale through to ensuring that the relationship between such spaces and the wider city is safe, welcoming, inspiring and beautiful.

“The role for design is of profound importance if we are to change our current path toward climate disaster and build cities that are both more climate-resilient and which can contribute to a social transformation in our attitude to the environment. The architect Ros Diamond in the early 1990s worked with Arts Council England to advocate for a mainstream education programme with a strong environmental and spatial agenda. The need for this is more urgent than ever, combined with the need for spaces in which it can flourish.

“Our collective experience with coronavirus should be the impetus to make this happen.

Cristina Monteiro is an architect, researcher and a founding co-director of London studio DK-CM. She has taught both postgraduate and undergraduate at Kingston University and Central Saint Martins and has been a guest critic and visiting tutor at the Architectural Association, the University of Cambridge and Syracuse University.

This article originally appeared in Deezen on 24 November 2020