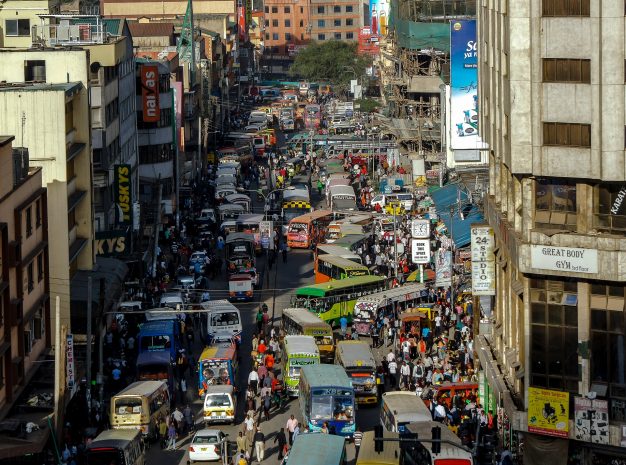 The journey to school – on foot or bicycle – for children in the Kenyan capital, Nairobi, is no longer as hazardous as it once was thanks to a new development project aimed at creating safer streets.

In a city where only 15 per cent of journeys are made by private car and almost half of all walking – 46 per cent – involves school journeys, a chronic lack of safe footpaths has long been a major stumbling block.

But it’s a situation that is finally being addressed through a new local government-led initiative which brings together road, park and all-round urban planners.

As far back as 2014/15, the Nairobi Integrated Urban Development Master Plan (NIUPLAN)  produced a report highlighting the lack of safe footways. This came around the same time as the government’s Non-Motorized Traffic Policy was passed, a key part of which was a requirement to implement safe footpaths and cycle lanes on major streets.

Yet by 2018/19 this lack of footpaths remained a serious problem, and was one of the key issues highlighted in four out of five of the school zone assessments carried out by Alliance Advocates, part of the Global Alliance of NGOs for Road Safety, which has reported these latest developments.

Children and teenagers account for 21 per cent of people who die in road crashes in Kenya, according to the National Transport and Safety Authority (NTSA). Very few people living in Nairobi’s low-income neighbourhoods can afford private motor vehicles, yet the new footpaths and cycle paths that have already been built have primarily benefited affluent neighbourhoods where car ownership is more achievable.

As funding for such projects from the World Bank started to dry up this year, Nairobi Metropolitan Services (NMS) was created to fast-track not just the vital walking and cycle elements of the city’s transport infrastructure, but also housing, parks and other urban planning projects.

The results have been almost instant; NMS, working with the Kenya Urban Roads Authority (KURA), has, in its first 100 days, already overseen the building and improvement of footpaths and cycle paths along many of Nairobi’s major streets.

The results have been almost instant

A host of school zones have been made safer, including three that were previously identified by Alliance Advocates: Moi Avenue Primary, Mbagathi and Kinyanjui road primary schools. More so-called ‘vulnerable schools’ in the Nairobi area will also soon be benefiting from this work, although due to the knock-on effects of COVID-19 restrictions there will now inevitably be some delays.

But when children do start returning to schools, which might not be until next year, many will have safer routes to follow. It means they won’t have to walk along the edge of a busy road without a ‘safe’ area in between them and the traffic. And, in the context of the pandemic and its ongoing restrictions, they will also find it easier and more practicable to follow social distancing guidelines.

Asked by the Global Alliance of NGOs for Road Safety for their views on the changes, Bright Oywaya, speaking for ASIRT Kenya, an alliance member NGO, said: “The non-motorized transport infrastructure developments are welcome and long overdue. For a country where the majority of the people walk, it only makes sense to focus on the majority. Social distancing cannot be possible where there are no facilities that support it.

“The construction of pedestrian walkways and cycling lanes makes it possible for more people to walk or cycle safely, thus minimizing the risk of infection from the COVID-19 virus and also the risk of being involved in road crashes as traffic mix is eliminated.”

The Global Alliance said that the work in Nairobi had ‘demonstrated the significance of political will and motivation to effect change and it proves that meaningful action can be achieved extremely quickly when the urgency is understood’.

Click here for information on the work of the Global Alliance of NGOs for Road Safety.