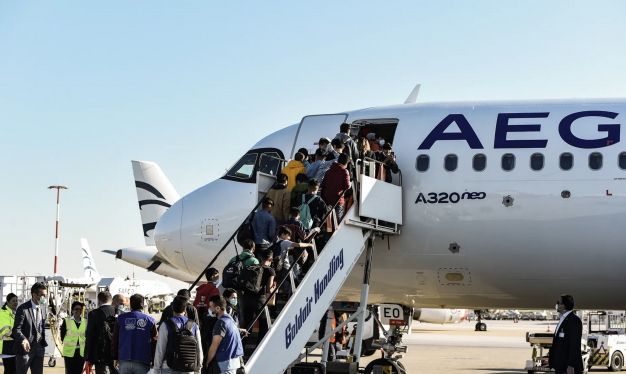 Published on 29-04-2020 at 09:14
Image: Unaccompanied children board a plane in Athens on their way to shelters in Germany last weekend. Photograph: Dimitris Lampropoulos/NurPhoto/PA Images

Ten cities in Europe have added their weight to growing calls for more countries to take in unaccompanied migrant children from Greece’s islands and Turkish border.

They have written to leaders of the European Union, pledging to offer a home to vulnerable children to ease their plight as this humanitarian crisis continues to grow, reports The Guardian.

Amsterdam, Barcelona and Leipzig are reportedly among these latest ten cities to offer their support, but there remains the sticking point of whether their respective countries are also behind the plans.

These, and other cities, can only provide this support officially if national governments agree, and it is reported that seven of the 10 signatories on the letter are in countries that have not volunteered to take in children under a relocation effort initiated by the European Commission in March.

Germany recently took in around 50 children under the scheme, while even Luxembourg, one of Europe’s smallest countries, accepted 12. These countries’ actions were the first relocations under the scheme which is intended to relocate around 1,600 children.

Belgium, Bulgaria, France, Croatia, Finland, Ireland, Portugal and Lithuania are the other European countries to have signed up to the scheme. It is supported by the International Organization for Migration (IOM), the United Nations High Commissioner for Refugees (UNHCR) and the United Nations Children’s Fund (UNICEF).