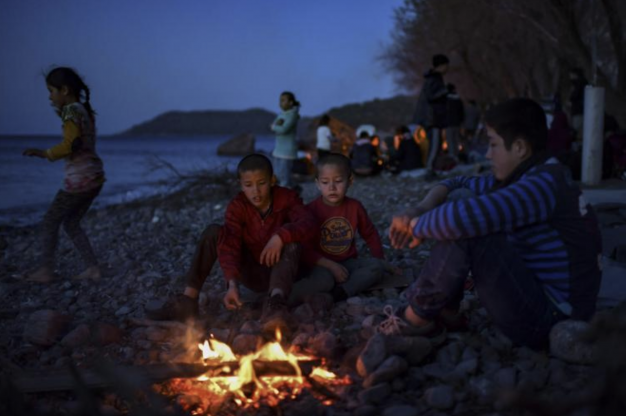 Published on 09-04-2020 at 09:48
COPYRIGHT: UNICEF/UNI308433/Messinis/AFP-Services Children warm themselves around a makeshift fire on a beach, after arriving on the Greek island by inflatable dinghies, on March 2, 2020.

Germany says it will shortly be taking in hundreds more unaccompanied minors from Greek migrant camps over the coming weeks, and has urged fellow EU countries to follow its example.

Announced Germany’s intentions, Foreign Minister Heiko Maas said it had told the Greek authorities it was prepared to take between 300 and 500 children in the next few weeks, reports thelocal.de newspaper.

In an interview with broadcaster RTL/NTL, Maas said that they wanted to ‘set an example’. The German interior ministry later released a statement saying that the transfers could begin within a few days.

It added that the children and adolescents, who arrived at the camps without their parents, ‘will at first be placed in quarantine for two weeks’, before being housed in various regions. Tens of thousands of asylum-seekers live in dire circumstances in Greek camps, and conditions have worsened recently due to outbreaks of the coronavirus.

Child in the City recently reported how FRA, the European Union’s human rights arm, had set out proposals on how EU member states can respond to the growing call to relocate unaccompanied migrant children from Greece.

The FRA is concerned that there are thousands of unaccompanied children in Greece who are living in ‘completely unsuitable’ conditions, without proper housing, at risk of violence and and facing bleak futures. Thousands of migrant children have poured into the country via land border with Turkey in recent months, and many are Syrians escaping civil war but there are also children from Afghanistan, Pakistan and some African countries.