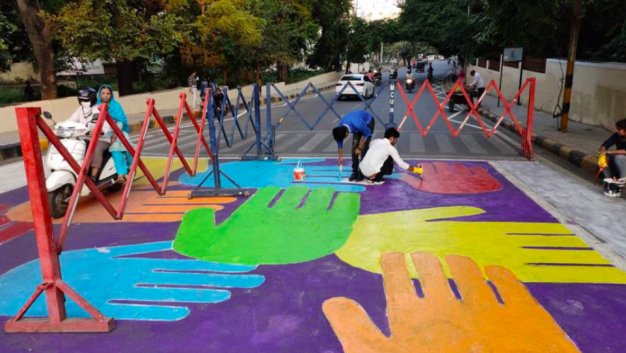 Udaipur in India, is the latest city to benefit from the Netherlands-based foundation, which campaigns to improve the lives of disadvantaged children in cities, in part through Urban95, which is BvLF’s dedicated cities project.

The city in zzz India held its first intervention from October 18-23 as part of the city’s Road Safety Week, working alongside the Urban95 partners, the Udaipur Municpal Corporation and ICLEI South Asia. They worked with students from a local college to paint creative designs on the road outside a primary school, to encourage drivers to slow down and make it easier for children to cross the road.

In Turkey, the city of Istanbul opened its first playground designed specifically for children under three and their carers. Situated in Attila Ihan park on the border of Yeniköy and Ferahevler neighbourhoods, it was designed by architects from SUPERPOOL. It is the first playground in Turkey to use the design principles set out in Playground Ideas for 0-3 Years, a guide published earlier this year in English and Turkish as part of the BvLF’s Istanbul95 programme.

Families living in the hilly neighbourhood of Alto Perú, in the Peruvian capital Lima, can now walk to their local childcare centre instead of using a moto-taxi. The Urban95 team worked with local residents to clean up the steep path which was dangerously uneven and strewn with rubbish, build retaining walls and install two handrails, as well as planting greenery and adding seating and rest areas, to create a safe and stimulating walking route. A video report of the project is available on YouTube.

Visit the website for more information about the Bernard van Leer Foundation’s work, including Urban95.