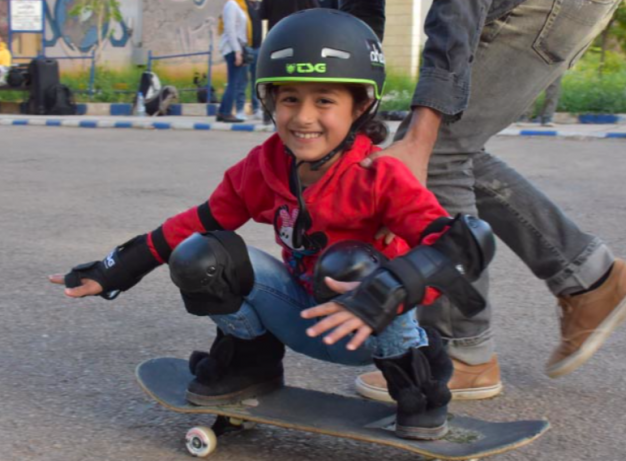 So much more than just a skatepark

It’s the first ever skatepark built in Syria but, if you ask the kids, it might just be the most important skatepark in the world.

After living through years of conflict, children in the Syrian city of Qudsaya are busy getting to know their acidwalks from their airdrops – skating moves to you and me – just like kids should.

But this is more than just a place to play. Open just a few months, this skatepark stands as a beacon of what is possible and, more importantly, a reminder that children’s rights extend beyond just somewhere to live. They need a place to breathe, to play, to express themselves.

A place to express themselves

Though based in the United Kingdom, SOS’s emergency work takes it to all the corners of the globe, helping ensuring that children and families who have been affected by conflict and disasters receiving immediate, lifesaving – and life-changing – support.  its work is truly global.

‘Play can be an essential part of their recovery’

“Growing up in the wake of a natural disaster, or in a community torn apart by war, should not mean children miss out on the chance to play – but all too often it does,” says SOS.

It says that children’s needs can easily be forgotten in the scramble to provide the basics such as food, water and shelter in emergency situations: “At SOS Children’s Villages we know that play matters too. And for children who have witnessed violence and destruction, or lost their homes, schools or even family members in disasters, play can be an essential part of their recovery.

“We believe in giving children in crisis back their childhoods through play. At our SOS child-friendly spaces in disaster hotspots around the world we offer children a safe place to play, make friends, and behave like the children they are.

‘They shouldn’t be playing on debris-strewn streets’

“In our village communities, children who have lost everything, including their families, are playing sports, going to dance lessons and discovering new and exciting hobbies. And around the world, our child-counsellors are using play to help children communicate their trauma and express their feelings through arts and crafts, singing and dancing, and storytelling therapies.

“The city of Qudsaya was left in ruins after the Syrian conflict, but now that families are beginning to return, children need a safe place to play. They shouldn’t be forced to play on the debris-strewn streets or in bombed-out buildings. We have built a skate park, so children traumatised by years of conflict have a safe place to play, release pent-up energy and begin to heal their emotional wounds.

The chance to be normal

SOS’s child-friendly spaces initiative has been employed for immediate and short-term relief in many humanitarian emergencies, including the the 2018 Sierra Leone landslide, Typhoon Haiyan, the Nepal earthquakes, the 2011 East Africa drought and, of course, the Syrian conflict.

“The skatepark makes me feel like we live in a very cool neighbourhood,” says ‘Sami, 11. “We can slide and flip with our skateboards like the guys we see on TV.”

And that’s just the way it should be. Sami didn’t ask for war to devastate his country, All he – and countless other Syrian children – want is the chance to be normal. And this skatepark is shows the way forward.