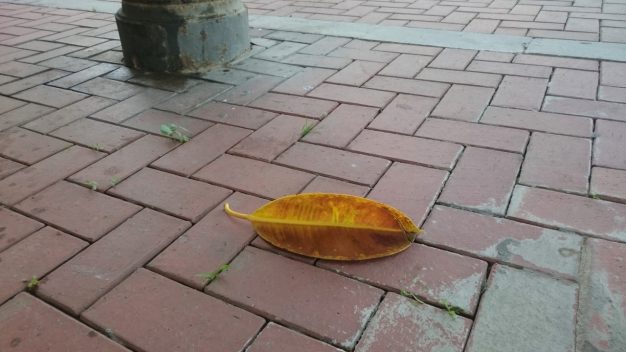 Sustainability 3.0 – i.e. what is placemaking

One of the keywords of Placemaking Week Europe 2019 in Valencia was sustainability. This so happens to be one of my favourite topics. The second key-word was co-existence visible on the level of infrastructure – reusing existing urban tissue, adapting, respecting what was already created, whether it was created 20 years earlier or a while ago because it is all somebody’s history. Sustainability was also visible on the social level, through inclusion – both when planning and using.

For five days I had immersed myself in sustainability, respect, coexistence and inclusion. And I must say I was feeling very content in it.

I will start from two stories – one about inclusion because it is a topic that brought me to Valencia, and the latter about respect.

The topic, which I was talking about and which I often write about, is the need for including children in deciding of their own space was present during Placemaking Week Europe every day. For me, the biggest discovery was a workshop with Urban95 (a project of Bernard van Leer Foundation) run by Hannah Wright. During the Child in the City seminar in Antwerp in May, I wanted to see VR showing how the world looks from the height of 95 cm prepared by the foundation together with Arup, but the equipment did not get there. Still, in Valencia I had a chance to experience an analogue version, with which I was extremely impressed – it was a perfect blend of effectiveness and simplicity. We were given masks attached to 95 cm long sticks and we went to experience Valencia from that height. I do not know why I have not thought of this solution myself – probably because I did not tell my children that I wanted to see the world like that, so they did not have the chance to give me the most obvious solution. As a result of the workshop, I had a chance to experience what I was presenting in Valencia and what I had known so far from my daughter’s stories. I definitely recommend it! Take your perspective to 95 cm and compare and contrast it with your normal perspective. 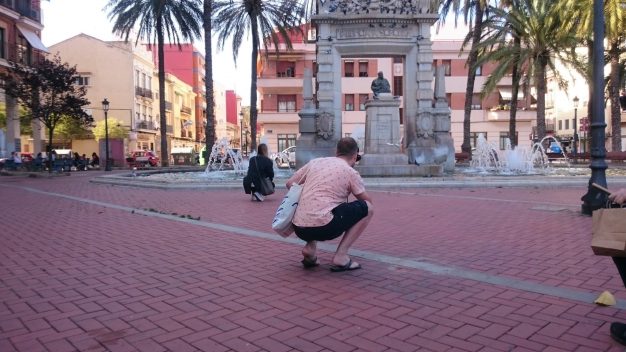 When it comes to the subject of respect the biggest discovery for me was Topio, a  project from Thessaloniki, which was presented by Vivian Doumpa. Young people took over the school site, changing it the way so it would be attractive for them. One of their tasks was the graffiti on the school wall. Since the wall had already been covered with tags and graffiti, they needed to design a new one that would incorporate was already there. They did it with artists and created a dragon.

Placemaking Week Europe took place at La Marina in Valencia. Patrons of the project emphasised that La Marina was carefully created in the way that it does not suffer from gentrification. And, according to what they say, they succeeded. The place attracts all social groups, is a stage of cultural events, this year a public floating pool has been opened there.

One of the festival days we were fed by Cocinas Migrantes foodtruck. It is a collective, which promotes diversity of immigrant cuisine in Valencia, treating it as a way of including immigrants in economic, social and cultural life of the city. It is a bit like my favourite Kuchnia Konfliktu in Warsaw, for which I brought a present from Valencia – a Cocinas Migrantes’ apron and a book.

In a micro scale sustainability was visible also in cups, which were smiling with Marina’s logo saying: “No soy plastico, soy vegetal”. Which means, I’m not plastic, I’m a vegetable.” 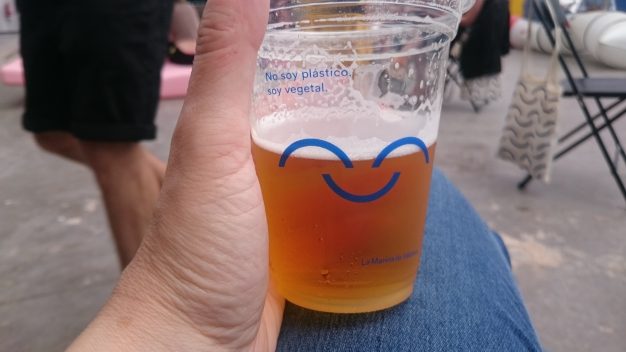 Traces of inclusion and employment are already visible everywhere in La Marina. The building, where the event was located was La Base, one of the objects that were left after America’s Cup in 2007. It used to be a base for the winning team – Alinghi and then its name was Base de Alinghi. Apparently, according to the agreement, the team was supposed to make sure the building would be demolished after the cup, but it never happened. The buildinghad been empty for years, and then the city adapted it for cultural activities. Now, it was the main base for the event.

La Marina witnessed more events than America’s Cup. Several years later Formula 1 race was organised there. La Marina owes it another abandoned object – La Pergola. During Formula 1 race it used to be a spot for watching the race. After years of being neglected it now serves as a stage for musical bands. 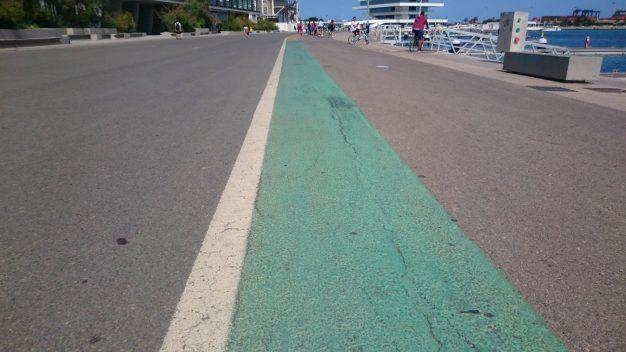 Traces of the past can be also found on asphalt around La Base, where F1 circuit had been painted. This year it has been complemented with signs showing how to get to Placemaking Week Europe venues. All those elements co-exist and create a history of the place. In a sustainability 3.0 state of mind placemaking is a product of history, which counts yesterday, today and now.

Beata Patuszyńska is a PR professional with 15 years’ experience in the real estate sector. Based in Warsaw, she works on planting ideas of sustainable development among grown-up players on the RE market, as well as educating the youngest on city issues. She has worked for various commercial and residential developers, as well as management funds. She has an active interest in urban issues and is a lifelong learner and promoter of urban topics.