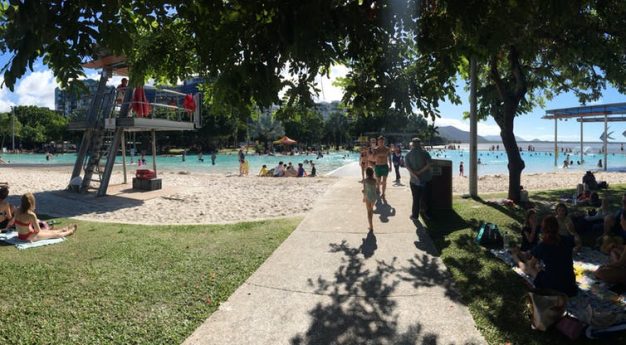 City temperatures and city economics, a hidden relationship between sun and wind and profits

The evidence shows businesses do better with foot traffic than car-based mobility. For example, closing New York’s Times Square to cars increased business revenue by 71% during an eight-month pilot project in 2009.

The following example helps explain why foot traffic benefits local business. In car-based cities, a take-away coffee on the way to work may involve a series of decisions:

In contrast, when walking down the street we may not even have considered having a coffee, but we can smell it. So:

The process is shorter, more spontaneous and part of a daily journey. Impulse buys as a result of exposure to stimuli have surprisingly big economic consequences, particularly for the retail industry.

Microclimate refers to the atmospheric conditions in an area. These can vary not only from the surrounding region but also within the area itself. Both the natural and built environments influence these differences. A well-known example of such differences is in Sydney’s western suburbs, which are much hotter in summer than the eastern suburbs, which benefit from being close to the sea and cooling breezes.

But can an unpleasant microclimate suppress impulse buys? To a certain extent, yes. The frequency of impulse buys, and ultimately the overall success of most businesses in tropical cities, may be connected to the local microclimate.

For instance, the orientation of streets in relation to sun and breeze exposure can influence the microclimate. This can then determine if people stay and have a second coffee or extra ice cream after lunch, or if they avoid streets because they are too exposed and hot.

Australian cities, however, are too often overzoned and planned in a sprawling pattern. By compromising walkability this represses spontaneous purchases.

CBDs are also too frequently oversized with unshaded wide streets. In hot climates this makes the journey on foot unpleasant and poses health risks to young children, senior citizens and people with health conditions.

Microclimates and the tropics

To date, a growing body of research on this question has focused mainly on capital and metropolitan cities with humid continental climates. The assumption is that those cities are more vulnerable to the effects of higher temperatures. However, looking only at these kinds of cities can lead us to overlook important variations.

The qualities and materials of buildings and infrastructure such as roads and footpaths also influence local temperatures. Large areas of hard, heat-absorbing surfaces contribute to the urban heat island effect, which makes urban areas hotter than their surroundings. The effects of this on urban life and economic activities become more critical in hot and humid tropical conditions.

In essence, microclimate affects the use of the footpath. If the microclimate discourages the use of public space, then a great design may not be enough to create the type of environment that attracts street life and generates strong local economic activity.

Considering this problem, our ongoing research focuses on tropical cities. We are investigating the relationship between urban microclimate, labour productivity, sales revenue and real estate values.

Is there, for instance, an optimum location for certain types of land use according to their suitability and need to use the footpath? If one side of the street is more exposed to the sun than the other, it may be more suitable for establishments that don’t make active use of the streetscape, such as stores and offices, rather than cafes and restaurants.

Another question is does microclimate affect the productivity of businesses differently across urban and non-urban surroundings?

Part of the solution to rising urban temperatures could focus on street orientation and exposure to breezes. Priority could be given to siting cafes, for instance, in pleasant areas, with tables outside to help activate spaces. Instead of creating zoning that kills flexibility and dynamic spaces, planning guidelines for tropical street life should consider the types of businesses suited to specific street microclimates.

In a warming climate, designing for microclimate is more important than ever before to ensure urban life and economies can prosper.