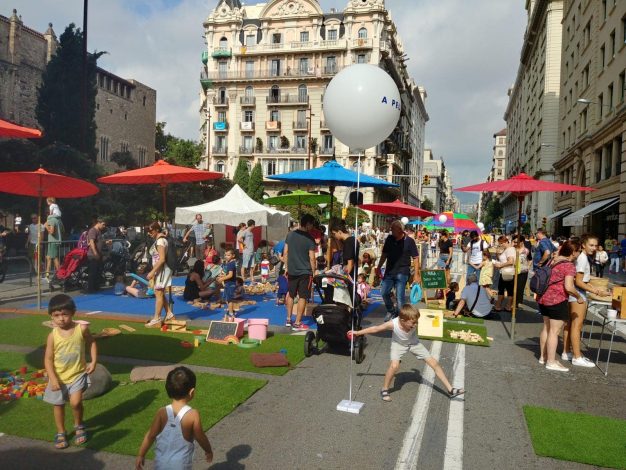 Reclaiming the public space for children in Barcelona

In Barcelona, a local non-profit association, Tata Inti, is working to recover the public space as a place for children to play. As well as providing a meeting point for children’s caregivers to meet and connect.

Tata Inti was created in Barcelona in 2014 in the neighbourhood of Sants. It was started by two mothers who were responding to a need for spaces where children could play within the community. The organisation states, “through free and creative play, we promote values of coexistence and give value to the bond between the adults of the community that educates. Our commitment is to make the needs of girls and boys visible, and ensure that they exercise their right to play freely while recovering common areas with and for people.”

Tata Inti provides neighbourhoods with space for families to enjoy to raise, educate their children within the community. The association has the mission to offer various services for families in the District of Sants-Montjuïc such as shared play space and afternoon activities for boys and girls and their families and activities for women during pregnancy.

In 2018 Tata Inti received funding through crowdfunding with GOTEO and a grant from the Barcelona City Council for their project “El Bosquet urbà” or “Urban Forest”. A free pop up play area for families with children between 0 and 4  years old. The pop moving play space provided a place for play for low-income families in eight neighbourhoods across Barcelona.

The location of the play areas was chosen by the families and neighbourhood as the aim was to create promote and provoke cooperation and active participation of all. Tata Inti argues that the streets, squares and empty spaces of the city should become places redesigned and reimagined by the government and citizens. They want to see the public space in a meaningful way, full of life and movement, thought by, for and with people.