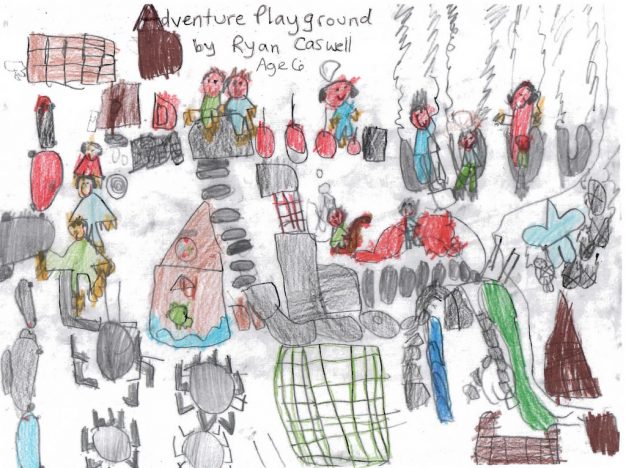 This article presents the second part of a case study interview with Tom Burns. In it, we discuss early adventure pioneers and how Tom went about setting up an adventure playground.

Tom Burns works as a Senior Lecturer in the Centre for Professional Education and Development at London Metropolitan University, United Kingdom (UK).

The 1970s have been constructed as a period of economic struggle characterised by high inflation, failing economies and industrial strife. However, it was also a decade, which saw people choosing to rebel and break away from the domestic and materialistic way of life promoted by most of the country until that point. Would you say you were influenced by this?

Tom Burns (TB): Yes, this definitely influenced us. It was about the sort of place we all wanted to live in and create affordances for everyone. It was about reclaiming the optimism. By the Seventies the National Front were on the march and the lower social orders were divided again between the “deserving” and the feckless, the “undeserving” poor. Suddenly the post-war consensus about childhood and the lower classes, that both deserved more in post-war Britain, was collapsing. So, although the council estate on the outskirts of East London where we moved to in 1967 was a garden village and there were Youth Centres and parks … all these were run by the great and the good who thought that the poor needed to be saved from themselves and children needed to be “told off”. Comprehensive education had not arrived in our outer London Borough and still to this day there is the same Grammar School that I refused to sit an Eleven Plus exam for. At least the Secondary Modern did not set out to quash our spirits even though it offered us no GCEs at all. It was in this space and this climate that we decided to build the adventure playground.

Early adventure play pioneers such as Carl Theodor Sørensen and Lady Allen of Hurtwood advocated for play-spaces free of adult-made play-structures. When you set your adventure playground, were you aware of this?

TB: Comprehensive education, Houses Fit for Heroes, powerful trade unions, Trade Councils, Tenant Associations, and even Parent and Teacher Associations, free schools and a National Union of Students: those without voices were having them heard. Times had changed. I am sure this enabled us to have our voices heard. However, we were not aware of any particular play movements – or the idea of junk playgrounds.

The adventure playground you set up developed spontaneously. Was there no opposition from the neighbourhood?

TB: The council complained and issued eviction notices. We gathered petitions, three thousand signatures, lobbied local councillors and MPs, had marches and picketed the Town Hall. They put a fence up. We bought a horse and a goat, dug holes for telegraph poles and opened. We had aerial runways, some massive swings, tall towers, fires and building going on all the time. We won.

Why do you think people opposed the playground?

TB: These playgrounds are horrible scruffy things. I can understand why somebody does not want to have an adventure playground next door to them. I really can understand this. Super fortunate on both sides of the playground we had support and on the East side, they had kids who loved the playground. Their parents actually joined the committee. So there was a connection between young people and parents developing, not in a confrontational way. That enabled us to put on festivals and so on. So in the end, the adventure playground was very outward reaching and embedded in the neighbourhood.

Does this mean the playground became well embedded in the local community?

TB: Although local people liked the playground, there was always this tension. You could say, look, this is free, this is for kids to have a good time, but then on the other hand, when you went to the council, you had always to advocate the health benefits to enable them to support you. There was always this opposition from people who did not really understand what an adventure playground was. The people who supported it came from the local area and could see what the playground was doing, without audits, without reports. They came up there and could see. And those were the greatest advocates who then also went back to local authorities and said we support this.

Did you get financial support?

TB: The playground did get some small funding from The Prince’s’ Trust, Fair Play for Children, the local council and the GLC. But for the most part it was self-sustaining out of money raised through events such as festivals, dances and plays. One event we called a ‘Dinner and Dance’. The first half included a play put on by Loughton College (E17 acting school), the second half was the dance with live band. The band were called the ‘Cafe Racers’, you know them as ‘Dire Straits’. This means, we had support, great support, but mainly practical and ideological support.

Why was it worth setting up such a playground – putting in all the effort?

TB: When I think back, I think about the great days we had. There’s a feeling of success, camaraderie and solidarity. I’ve never seen children as transformed as by the experiences they had on this adventure playground.

It seems the playground offered great opportunities. However, adventure play is not without its risks. Did you or anyone else ever get hurt?

TB: On the adventure playground, only one major accident happened in ten years. That was somebody who broke their arm. We had a structure that was really big, with a platform that was twenty-five to thirty foot up. There was a swing with a great, big lorry tyre. This hung ten feet up. There were two platforms on either side. The lorry tyre was between the two and you had to jump to reach it. This was the most dangerous we had. You had to jump otherwise you would not get on. It swings about ten foot off the ground and you had to climb on one of those platforms. If you wanted to get on it, you had to jump. But what happened? The boy who broke his arm did not miss. The problem was, there was not one person on it. You had twenty or thirty on it. So if one jumped, another one followed and jumped on top of him, and another one jumped on top of them. The accident happened because there was a child that was rather big. He followed this child and could not get his arms around. He slipped. As he slipped, he grabbed hold of the other ones and they all fell. They all landed on the ground on top of each other. How he got hurt was the other children landing on top of him. Brilliantly, though, this was one of these days when his mother was there. ‘Right’, she said, ‘you are a silly boy. I knew it would be you. Come on. I’ll take you to the doctors’. We put it in the accident book and that was it. That was the only accident we ever had.

Considering you only encountered one accident in all those years, would you say adventure playgrounds are safe?

TB: There is risk as adventure playgrounds are dangerous places. We had fires. We had fires burning all the time. We had fires where the fire brigade would do “drive bys” to ask if everything was okay. We had people saying there will be accidents. You can’t have kids with fire. However, we never had an accident apart from the one kid who broke his arm.

This means, although the playground was safe, there was a remaining risk. Could this risk have been avoided?

TB: When we think about the boy who broke his arm, we would have to have rules, for example, one child at the time on the swing. However, you can’t implement a rule like this on an adventure playground. If you put a swing there they are up it like rats on a rope. However, I don’t know if this would be the same nowadays. There is different conditioning. At that time, if you put a swing there, then you had everyone on it. Hence it is important to communicate this with the kids, especially with things you know they are unaware of. For example, none of our kids ever would make the mistake and think petrol is like paraffin. Petrol goes “bang”. So, you had small children saying to people: ‘What is this you are bringing up here? Is this petrol or paraffin? If you’ve got paraffin, bring it here. If you’ve got petrol take it there’. They knew the difference. They were aware of the danger.

Considering this, what would you say was the biggest danger?

TB: The biggest danger was not the kids because they knew. They knew about fire and got used to it. The danger was so-called helpful parents. During the dustman strike, they came up and tried to burn their own rubbish. They said, ah, we came here to help you. And they were throwing tins of baked beans and plastic onto the fire. This was dangerous. So when we talk about all these kids, they knew about the danger of this playground. The ones putting rubbish on the fire were often the ones who were the first ones to raise their finger in terms of health and safety.

What do you recommend then in terms of health and safety?

TB: What the literature says is that children will not take risk they think they can’t manage. Children will only get themselves involved in things they can manage. I am now standing there with this kid and his parent, and this kid, about three or fours years old, starts climbing up this thirty-foot high platform. I said, well, this is an adventure playground and children will stay away from places they think are dangerous. The parent asked me: ‘Are you sure about this’. And I said: ‘I have read about this in a book last night’. In fact, the kid got stuck up there. So, I climbed up and helped him down. The kid was never in danger. Over the next few weeks he climbed higher and higher, and within five days he was standing on the top of the structure. And this is what I did find, because there is danger, the kids are very careful. You are not protected. This is dangerous. You take the risks you can manage.

What would you then say to those that are still critical or think it is too dangerous?